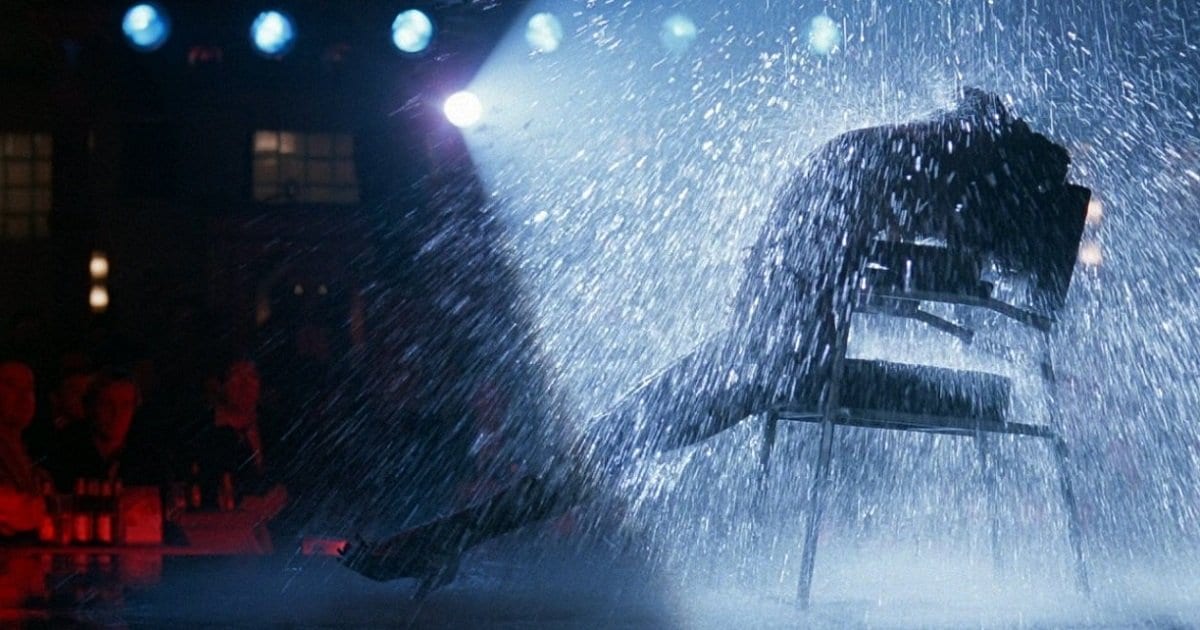 Flashdance inspired mania among the masses back in 1983, and Alex Owens’ passion for making it happen has influenced many a generation since its release. 35 years later it is still considered one of the most memorable films of the 1980’s. Some have credited it with helping revive the modern musical with its sexy complex dance sequences and use of popular music.

From the off the shoulder grey sweatshirt Jennifer Beals rocks in the legendary bra-removal scene to the soundtrack with the Oscar-winning original song “Flashdance… What a Feeling,” the film had a significant influence on 80’s style and culture. Countless parodies and tributes have popped up over the years, including an Alex Owens Barbie doll released in 2010, and a musical adaptation called Flashdance The Musical that had a short run in the UK in 2008. Many famous stars have cited the film as a major influence on their own careers such as Jennifer Lopez who paid tribute to the film in her 2002 music video for “I’m Glad.” Furthermore, it helped to peak public interest in dance flicks which did nothing but help films like Footloose and Dirty Dancing.

However, critics panned Flashdance upon its release and dismissed the plot as flimsy and ridiculous. The film landed on Roger Ebert’s list of his most hated films of all time, and many professional critics have mirrored that sentiment. I spoke with a few people who saw the movie in theaters back in 1983 who stated fans of the film were mostly enamored with it because of the 80’s fashion, the music, and the dance sequences — not because of the strength of the plot. “The movie wasn’t taken seriously, but it was popular,” said one such moviegoer.

Despite its deficiencies, the film has become a classic, and it continues to resonate with audiences. On the 35th anniversary of its release, let’s take a look at some of the more memorable moments from the monumental sleeper hit that heavily influenced 80’s popular culture. 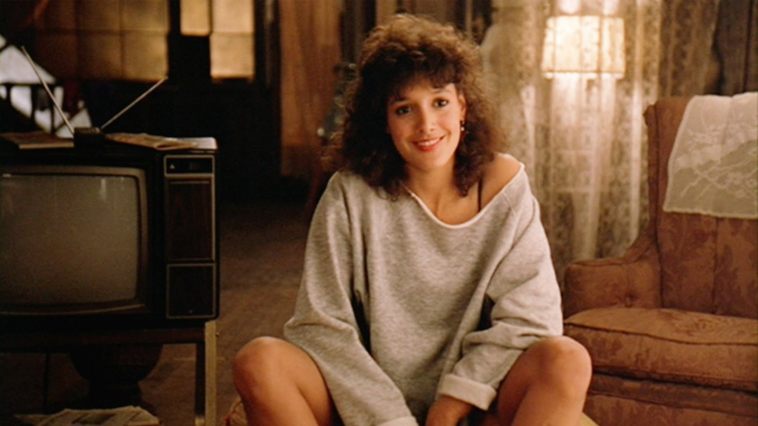 Who can forget Alex’s severely sweaty dance workout performed to the song “Maniac?” What makes this scene memorable, you ask? I guess 4 solid minutes of watching Jennifer Beal stretching and running in place has staying power with audiences. The scene serves no narrative purpose whatsoever and it’s ridiculously long. Nevertheless, it is one of the most parodied scenes of the entire film. This scene has received nods from films like American Wedding and Dance Flick.

Her knee-high leg warmers, bikini bottoms, and taut physique will forever be engrained in our minds. 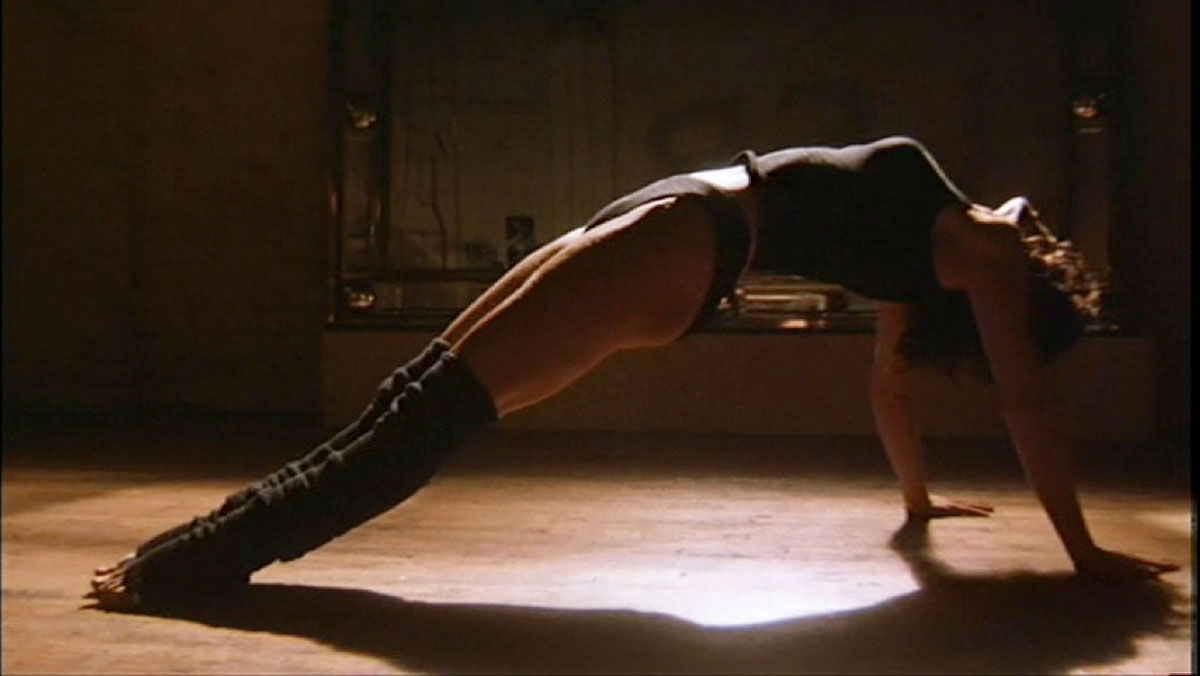 image via The Oscar Buzz

The first of Alex’s stage performances in the film is an avant-garde burlesque number where she douses herself in water and shocks the audience with her powerful dance moves. In an interview, director Adrian Lyne said he liked the idea of a “wet dance” because he thought the water-soaked clothing clinging to Jennifer Beals’ body would be particularly sexy (no kidding?). Audiences agreed, and this scene is now a pop culture staple, receiving recognition from several films and television shows such as We Are The Millers with Jennifer Aniston’s seductive warehouse dance scene.

The most iconic moment of the film is Alex’s audition scene at the end. Alex’s difficult jumps, spins, and breakdancing that make up her most challenging dance blew audiences away in 1983. It is noteworthy that several people served as body doubles for Jennifer Beals in this scene, including a gymnast, a male breakdancer, and dancer named Marine Jahan. Jahan performed many of the difficult dance moves in the film, yet did not receive credit for her work.

This scene has been famously referenced by several films, television shows, and music videos. My personal favorite is in the movie The Full Monty; a group of men down on their luck use the film as study material as they prepare to perform their own all-male strip routine.

Based On A True Story?

There is wide speculation that the story behind Flashdance is based on the real lives of two Canadian women: Maureen Marder, a dancer who worked as a construction worker by day and stripper by night (sound familiar?), and Gina Healy, aka. Gina Machina, an exotic dancer at a club called Gimlets.  According to Gina Healy in an interview with Buzzfeed, Tom Hedley, who pitched the idea for Flashdance to Paramount, frequented the club where she and Marder worked.

The women claim Hedley ripped off the story of their lives without providing proper compensation. Tom Hedley has repeatedly refuted these claims and states his story is a work of fiction. Prior to the film’s release, both Gina Healy and Maureen Marder signed away their rights to the story in exchange for $2,300. Over the years, both women have maintained they deserve a more substantial reward for their alleged involvement in the film regardless of what they signed before the film was released. Marder even went as far as filing a lawsuit against Jennifer Lopez for imitating scenes from Flashdance in her music video for the song “I’m Glad.”

It’s pretty incredible how this low-budget, cheesy dance film influenced the culture of an entire decade and continues to reassert itself in popular culture to this day. The film’s footprint is everywhere, popping up in the form of one-liners in sitcoms like Friends, and promotional material for the Marvel superhero flick Deadpool 2.

Despite poor critical reception, Flashdance was the third highest-grossing film of 1983 behind Return of the Jedi and Terms of Endearment. It launched the careers of Jerry Bruckheimer, who has gone on to produce notable works like Top Gun and Pirates of the Caribbean, and Jennifer Beals, who has acted in many movies and television shows since her debut as Alex Owens.

I think Flashdance is a great example of the power of performance art. Although the story is full of holes and the acting is over the top, the film is visually appealing. If you can forgive its shortcomings, the film will entertain you.

Thanks for reading!  What are your thoughts on Flashdance?  Comment down below!

[…] love Step Up 3D. Despite the cringy dialogue and the ridiculous plot, I love it. Step Up 3D has amazing choreography and fun costume design. The setting has a grungy underground feel without getting too dirty. And […]

Yes, the plot is simplistic (fear of following your dreams/failure) and some elements were questionable (an eighteen year old welder with a kick ass loft), but it was, and still is, visually interesting, not unlike Hitchcock’s Vertigo. I have always adored the cinematography and direction—think of the date in the steel yards and abandoned building—it looks romantic!