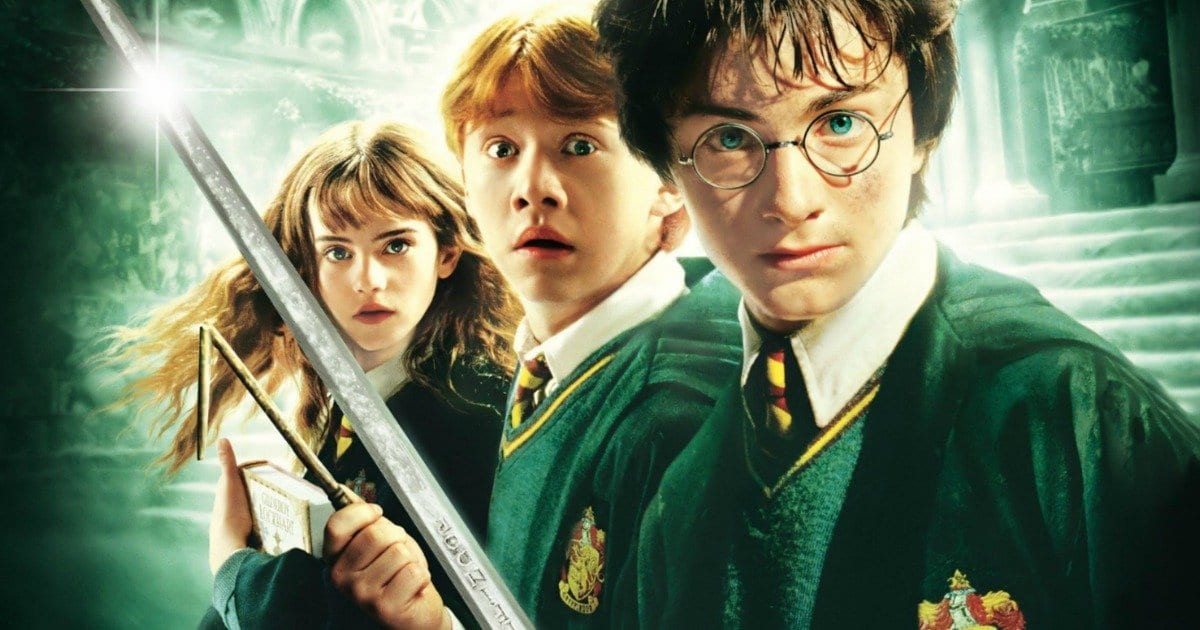 Not all children’s entertainment is created equal. If you ask any parent, they can without fail rattle off a movie list of forbidden movies. These have often driven the parents crazy at some point. On the other hand, the movie list of tolerated films will be a decidedly shorter list. And for those crazy enough to embark on road trips with their brood in tow, the movie list that won’t induce heart burn is smaller still!

I always wondered how my parents dealt with the constant bickering and loud, random noises on long road trips. Luckily for my generation, there is the miraculous gift of technology to keep our charming, little stinkers busy. While traveling this summer, I compiled a short list of movies guaranteed to keep your kids happy. Plus, your sanity will remain intact! 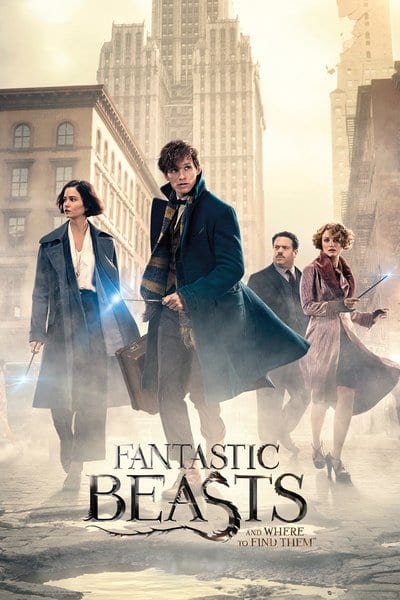 Fantastic Beast and Where to Find Them - Image via IMDB 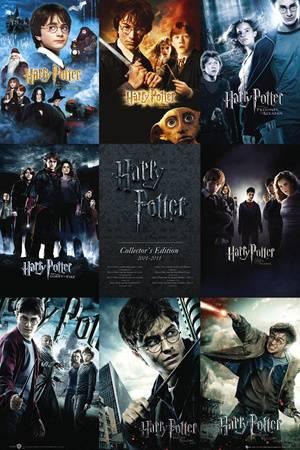 These are often featured in movie lists and it’s easy to see why! The Harry Potter Collection and Fantastic Beasts and Where to Find Them will give any parent literal hours of quiet during a road trip. The amazing acting, effects, and plot line keep children of all ages occupied and entertained. Our three kids have been watching HP since they could sit still long enough to watch a movie. I always recommend watching Fantastic Beasts and then the Harry Potter collection. 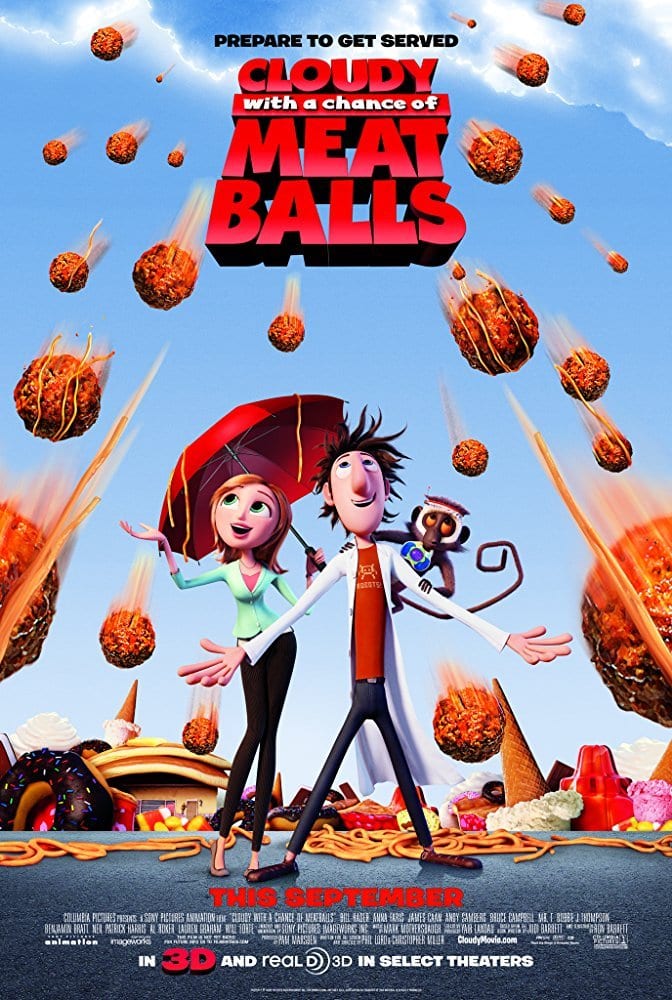 Cloudy with a Chance of Meatballs - Image via IMDB 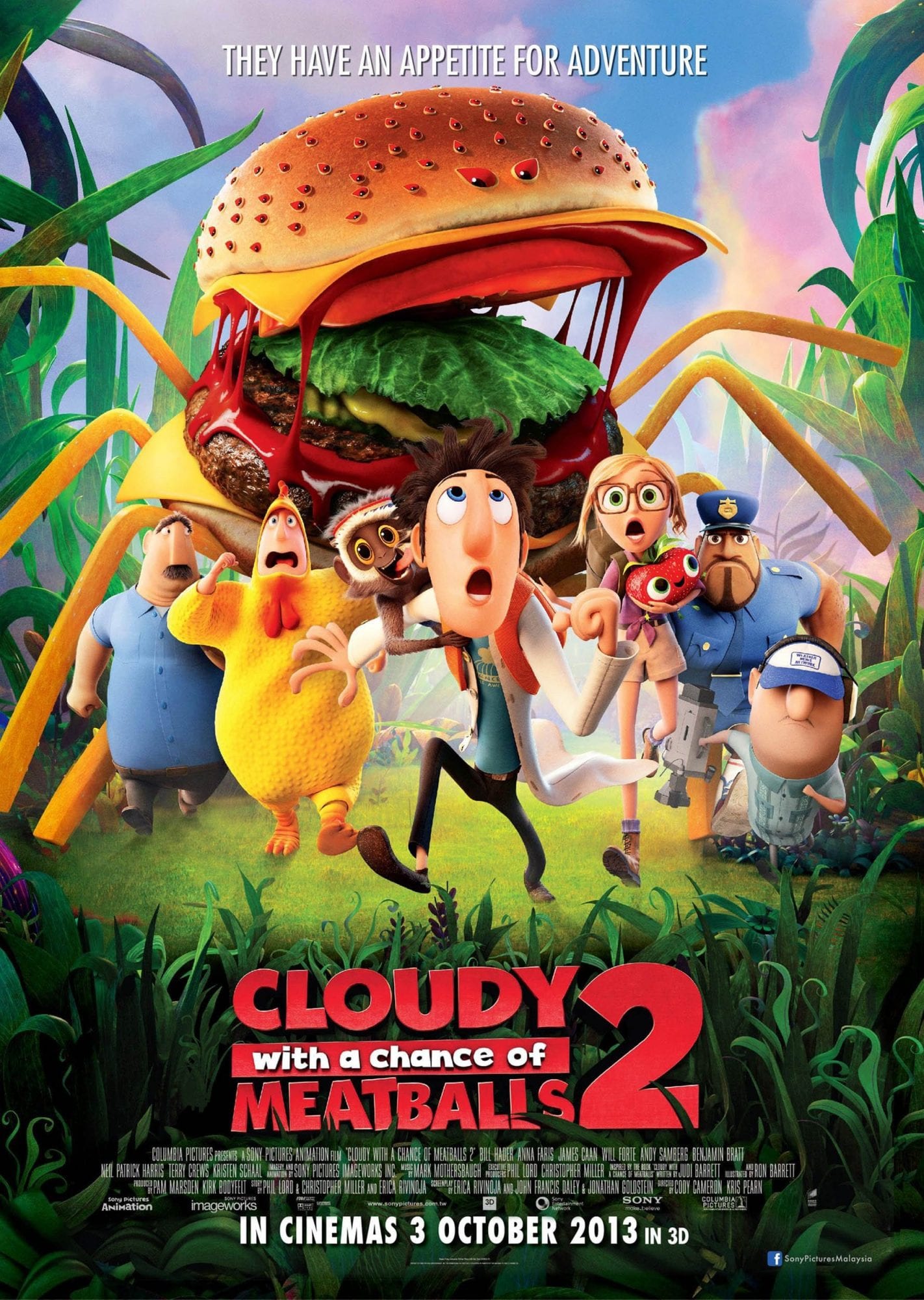 Cloudy with a Chance of Meatballs 2 - Image via Film Wiki

No movie list for kids would be complete without some animation! Cloudy with a Chance of Meatballs is actually a really fun movie series to watch with little ones. The jokes are funny to both older children and younger children (who doesn’t appreciate a good fart joke?). As an adult, I appreciate the 2nd Cloudy the most because there are so many funny puns once Flint Lockwood (voiced by Bill Hader) goes back to the island. In addition to being good movies for the car, these are great on rainy days also! 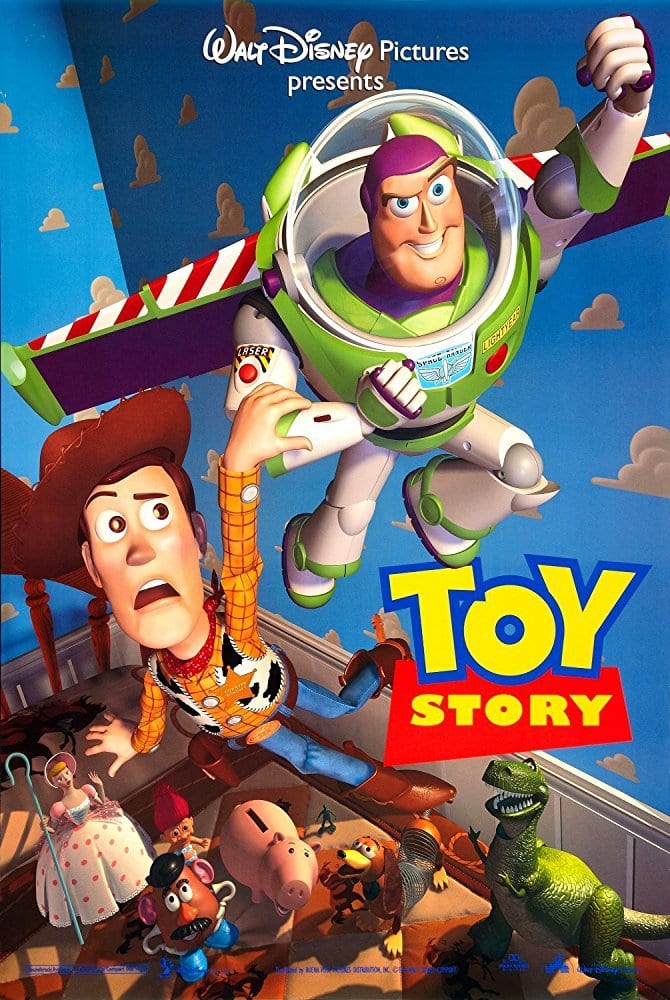 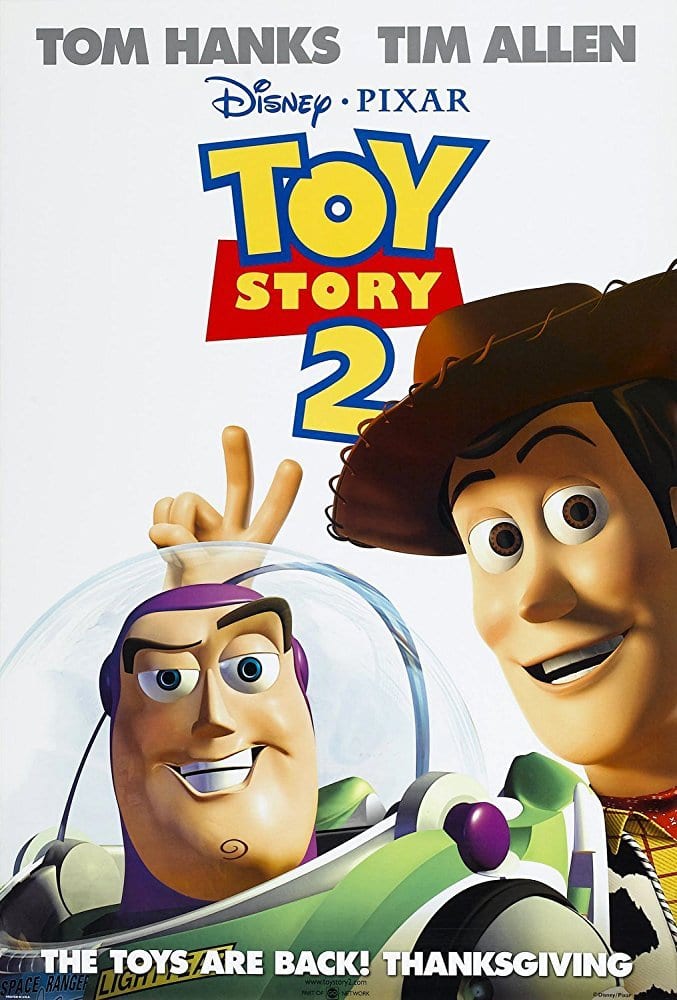 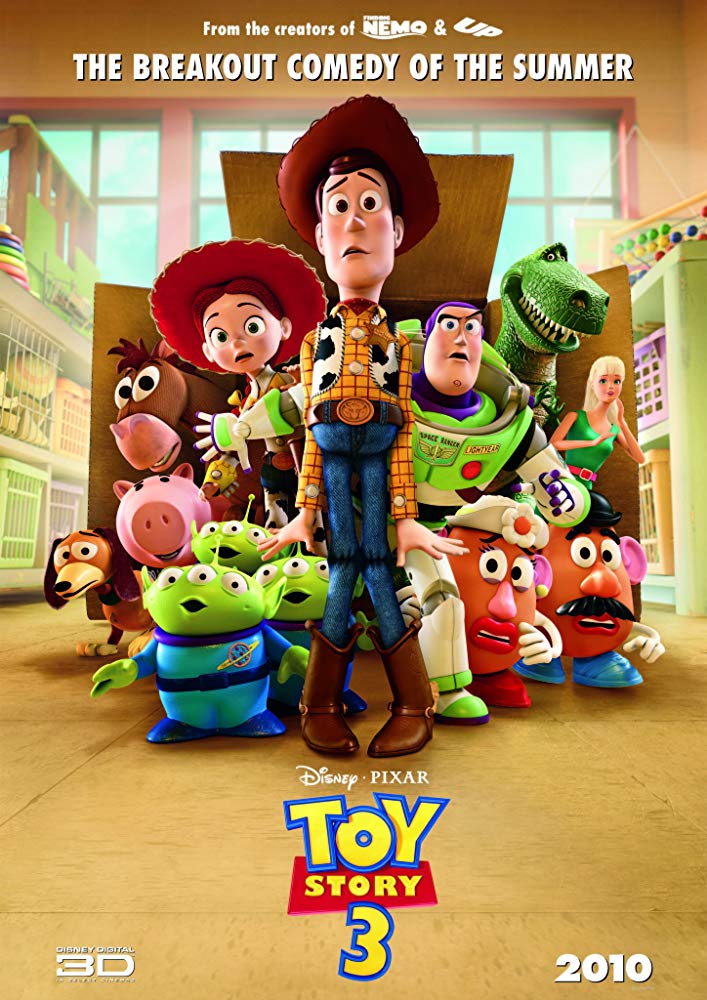 The epitome of kids movies has to be Disney, and this movie list wouldn’t be complete otherwise. In 1995, the first Toy Story came out  and I was 11-years-old. The magic of this film has lost nothing for me as it ages, and my children love the original just as much as the sequels. This is one of the few movie series that remains evergreen. Just like Cloudy with a Chance of Meatballs, the jokes are great for older kids and younger kids. Tim Allen and Tom Hanks are one of my favorite buddy duos ever. 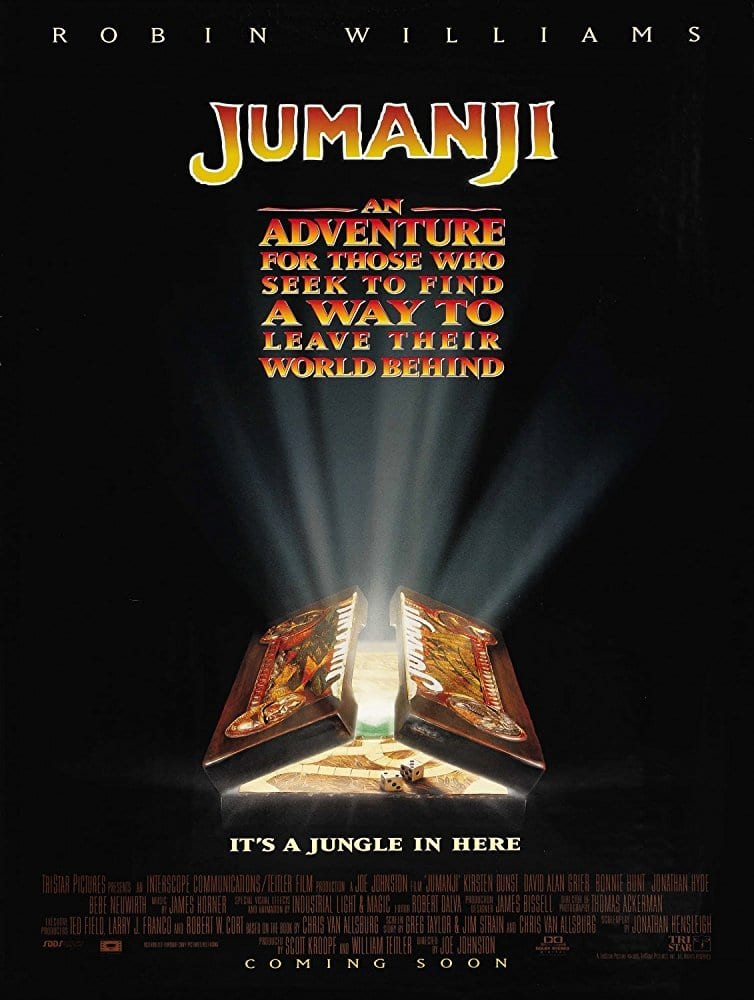 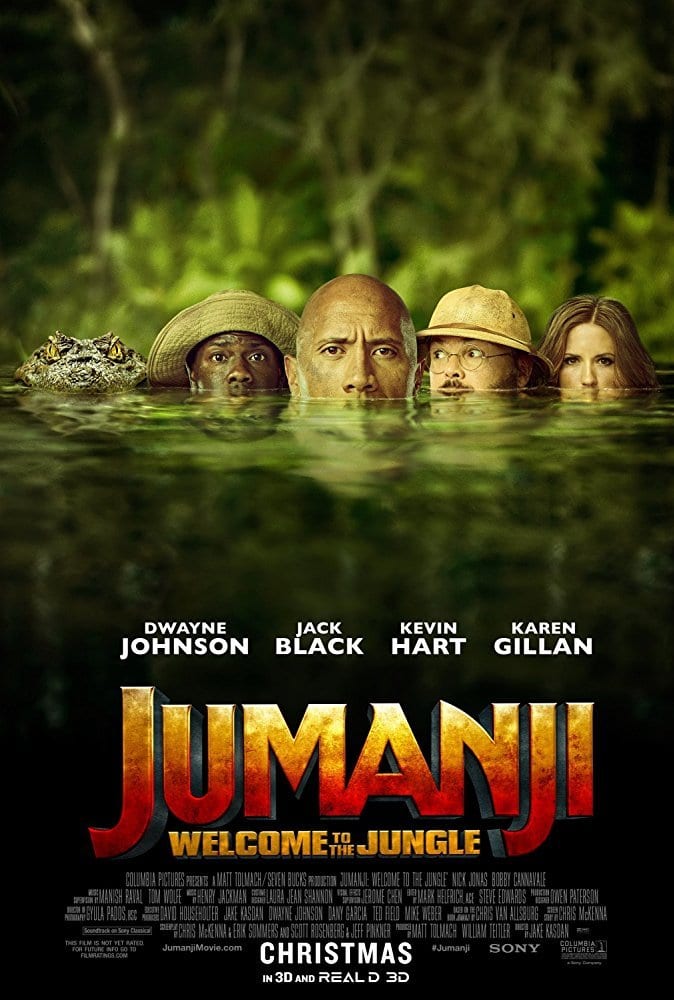 Jumanji: Welcome to the Jungle - Image via IMDB

These are some of my favorite on this movie list, to be honest. Mostly because I love hearing my daughter walking around and pointing out Dr. Bravestone (Dwayne Johnson) on other movie covers. I also loved hearing my sons talk about how the man in Jumanji sounds just like Genie in Aladdian. The effects in the first Jumanji are definitely dated, but that is easy to overlook because the story is still such fun. Happily, Welcome to the Jungle doesn’t take itself too seriously, and it is actually funny. My kids loved the part where Kevin Hart’s character explodes because of his cake weakness! And I love listening to them laugh instead of fighting over whose foot touched their side of the car. 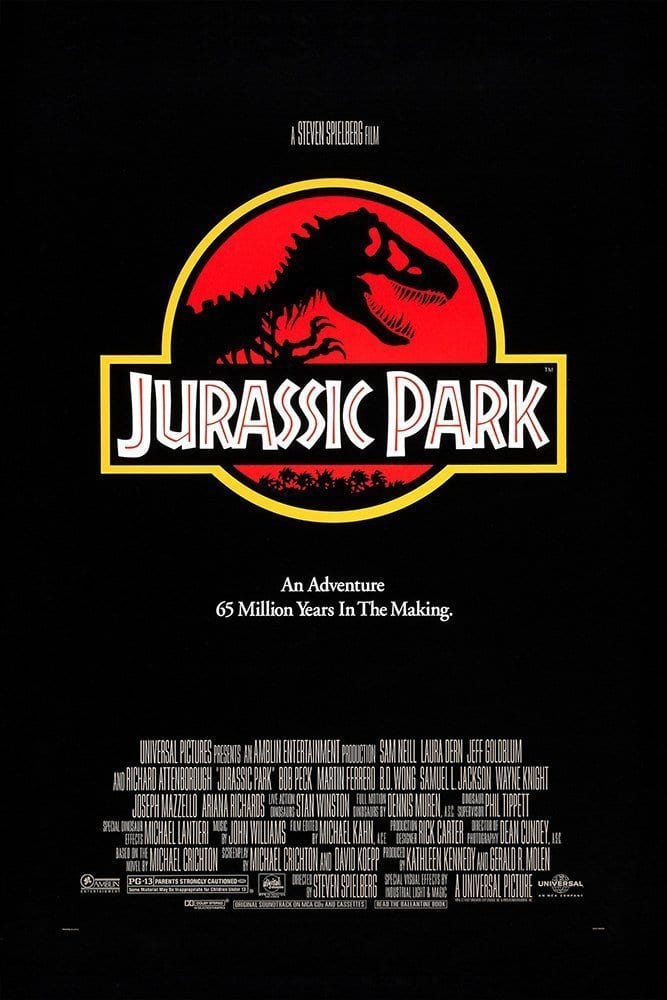 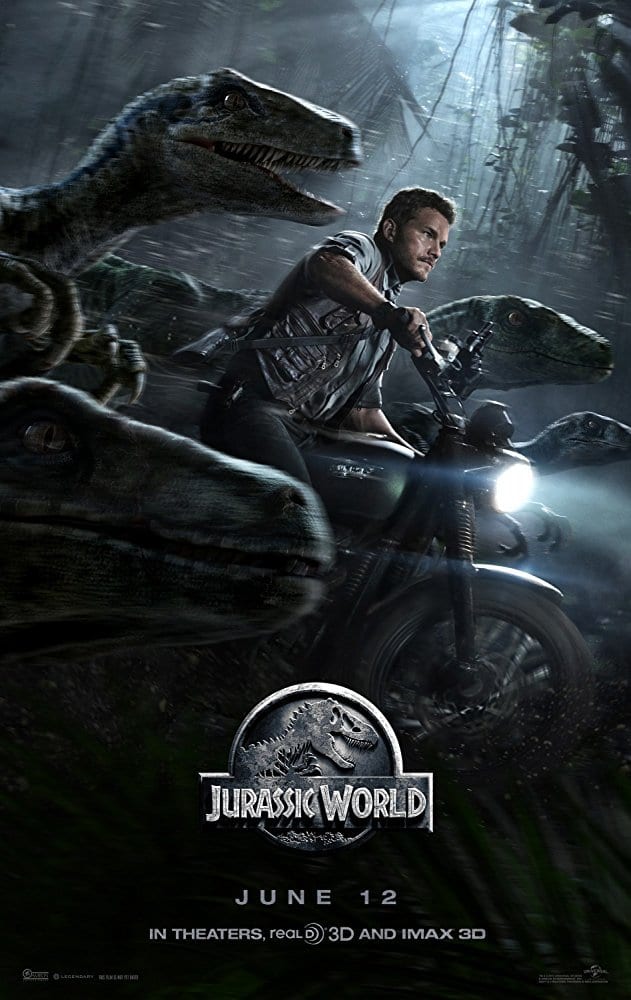 When I had my son, I was warned that little boys seemed to naturally gravitate towards things with wheels or dinosaurs. And honestly, the first things my boys played with were pink tutu dresses and tea sets, because they have an older sister. Yet, one day the middle son woke up and basically demanded T-Rexes. With pure delight, I showed him Jurassic Park and watched as his eyes grew ever bigger with happiness. While Jurassic World may not be everyone’s cup of tea, I quite like it because it brings my kids joy. Plus, it’s kind of funny to hear T-Rex roars coming from the backseat as I drive through the countryside. These are a must for any movie list if you have a dinosaur loving kid. 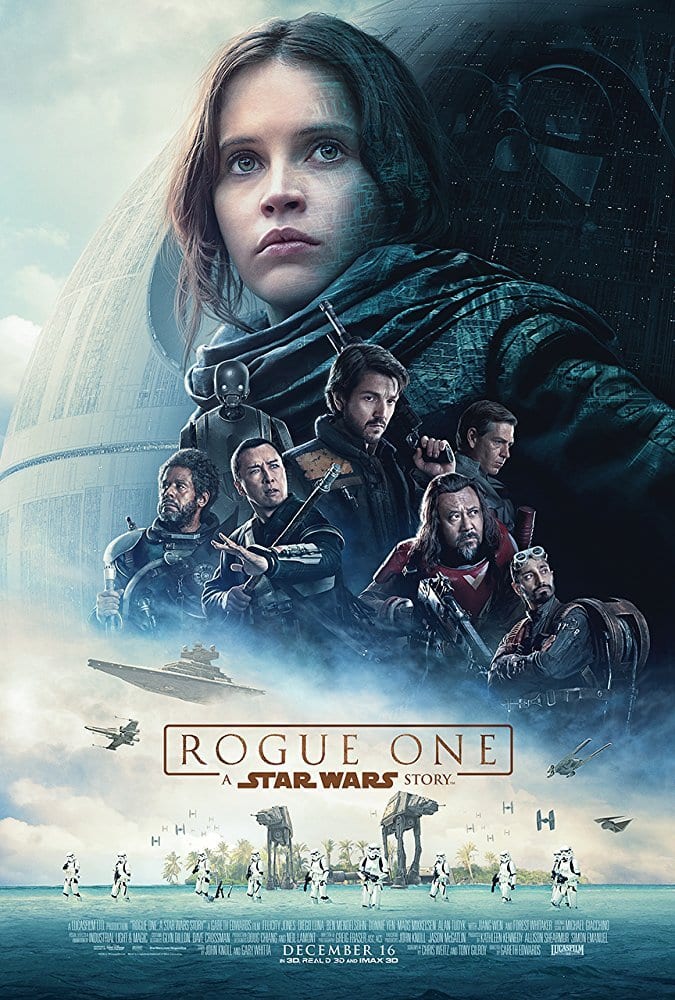 Rogue One: A Star Wars Story - Image via IMDB 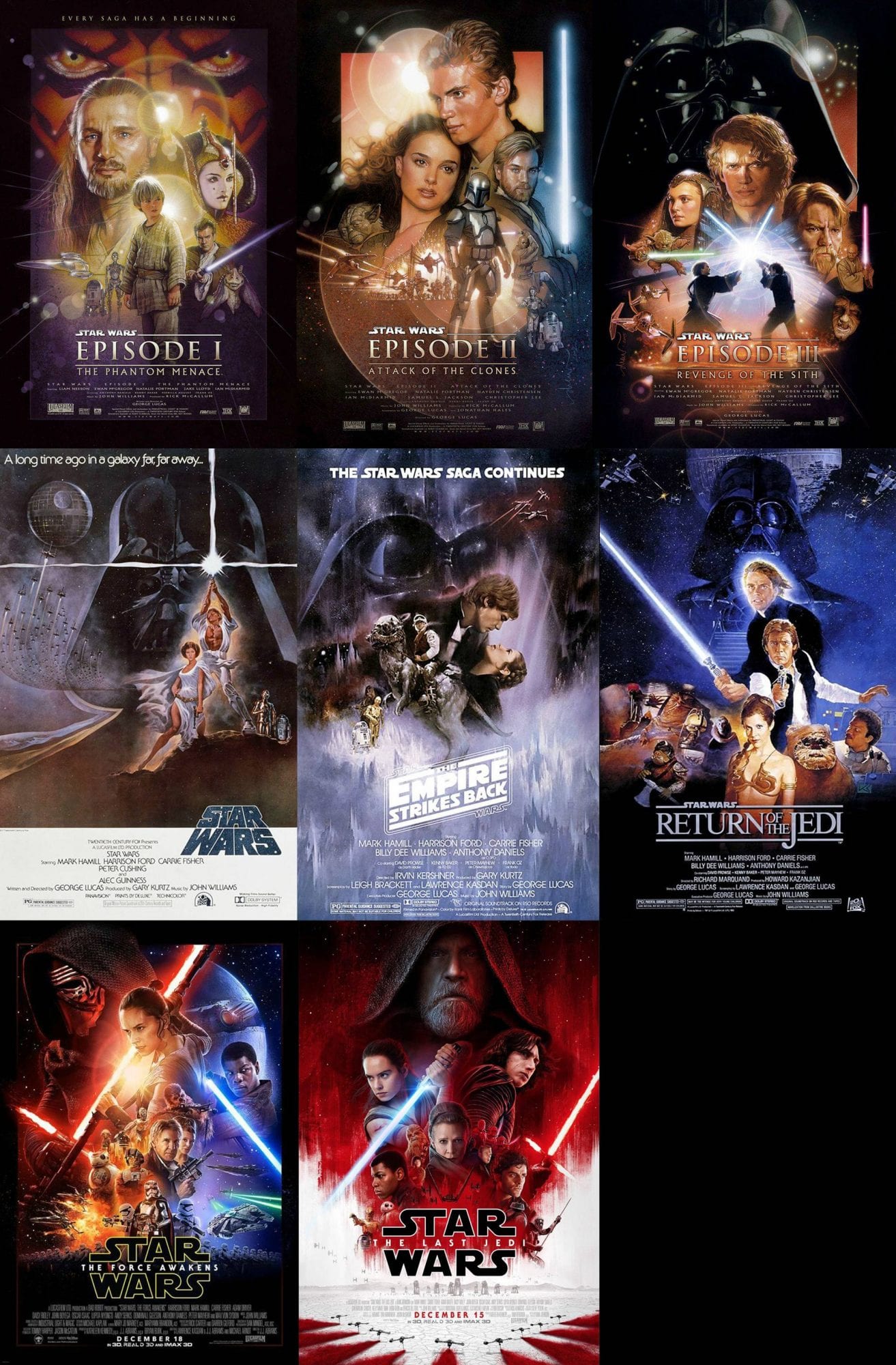 Okay, I wanted to say this about Star Wars… no one actually likes the prequels. My proof lies in the fact that in the first film (The Phantom Menace) there is a literal child as the protagonist and my children don’t like him. So, while I have included the movie posters in this section, they will not be included in the overall movie list. I always make the children watch Rogue One before they start the original trilogy. The ending of Rogue One is the perfect lead into the original movies, and my boys are obsessed with Darth Vader (who isn’t though?). My daughter was decidedly lukewarm about the Star Wars movies until she saw Rogue One. After she saw The Force Awakens she was fully hooked on the series. 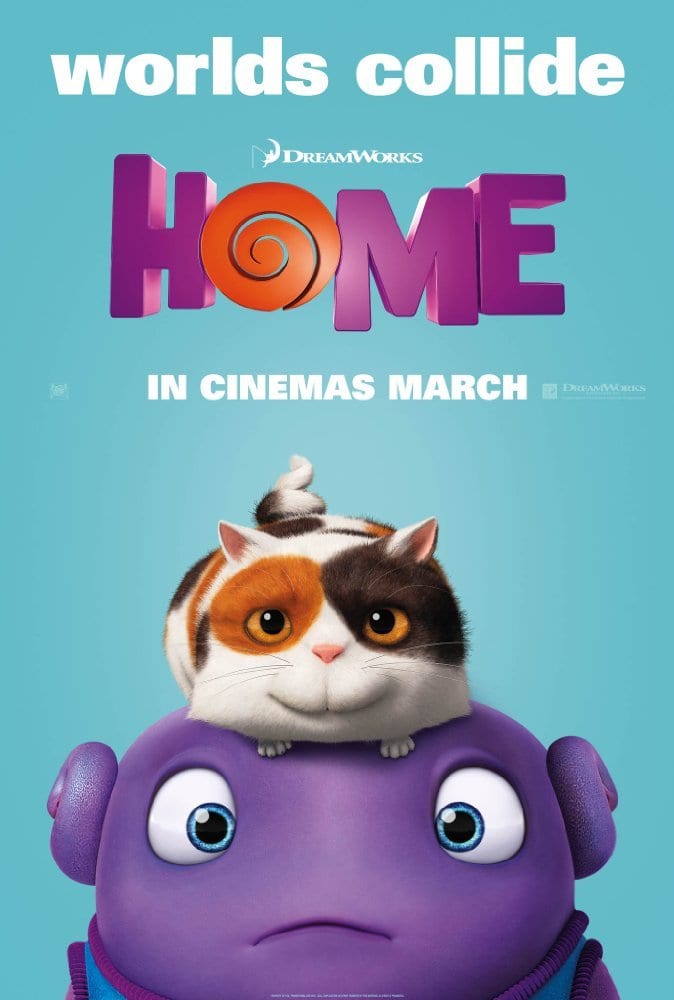 We watch this one because we have seen it so many times. It’s one that makes my boys fall asleep, and I don’t mind listening to it even when they aren’t watching it! I also love Rihanna as main character Tip. 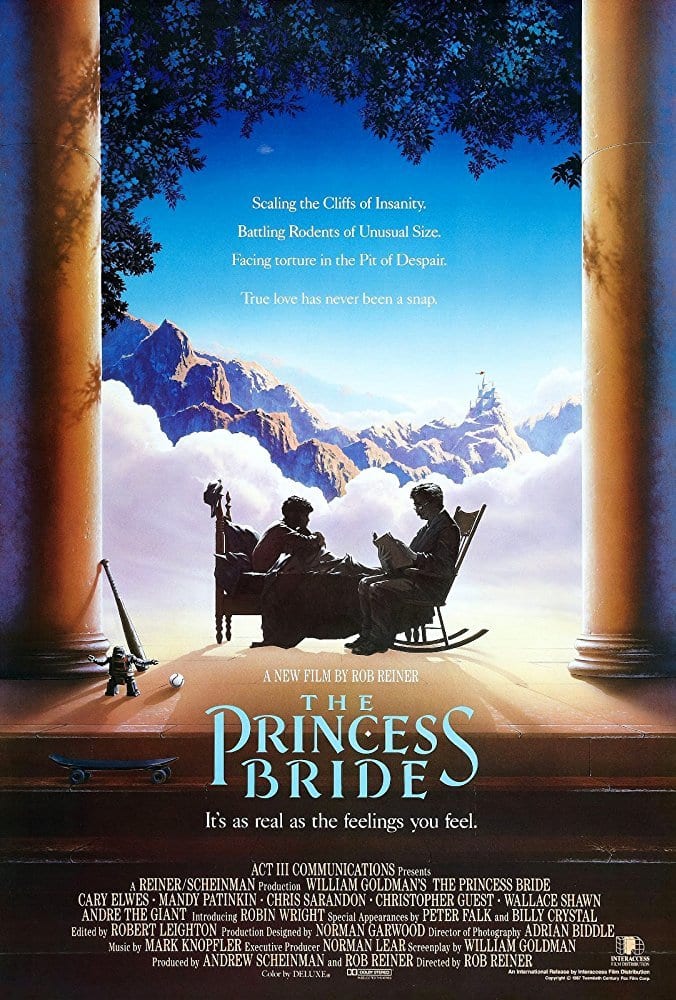 The Princess Bride – Image via IMDB

This is such a classic 80’s movie — I was so happy when Amazon finally got put this on their video platform. I have to try very hard to not say every word along with the movie. Apparently, I am guilty of doing this more often than I realize. 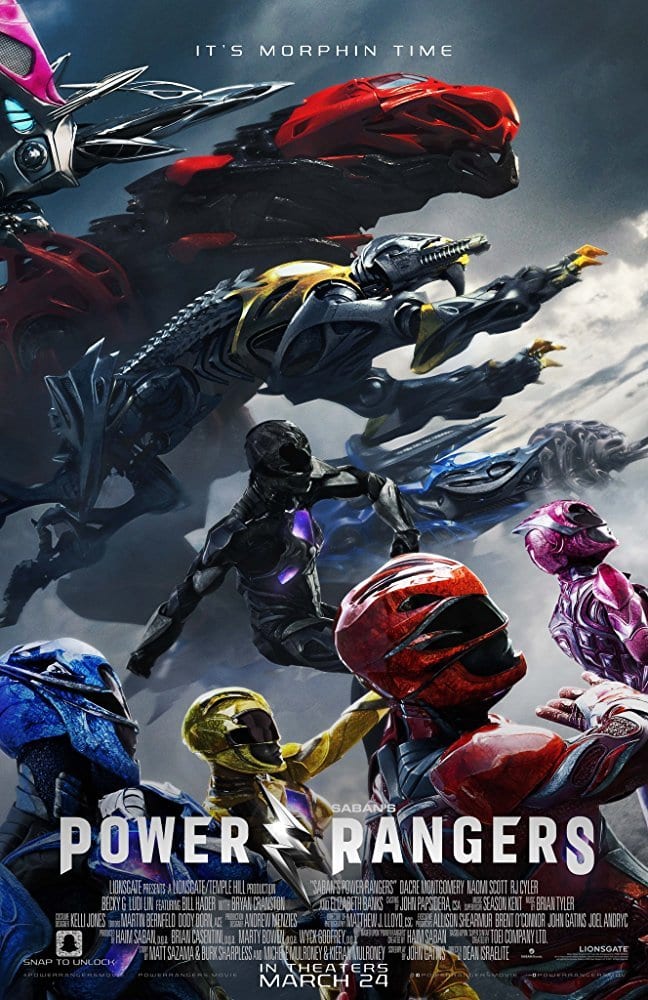 Okay, again, I know not everyone loved this movie. But we love Power Rangers — the original show was on Netflix a few years back and I was gleeful to watch it for weeks on end with my kids. When this movie came out, I was chomping at the bit to get it on our road trip movie list! I still love hearing my kids exclaimed, “Woah! Megazord!!” 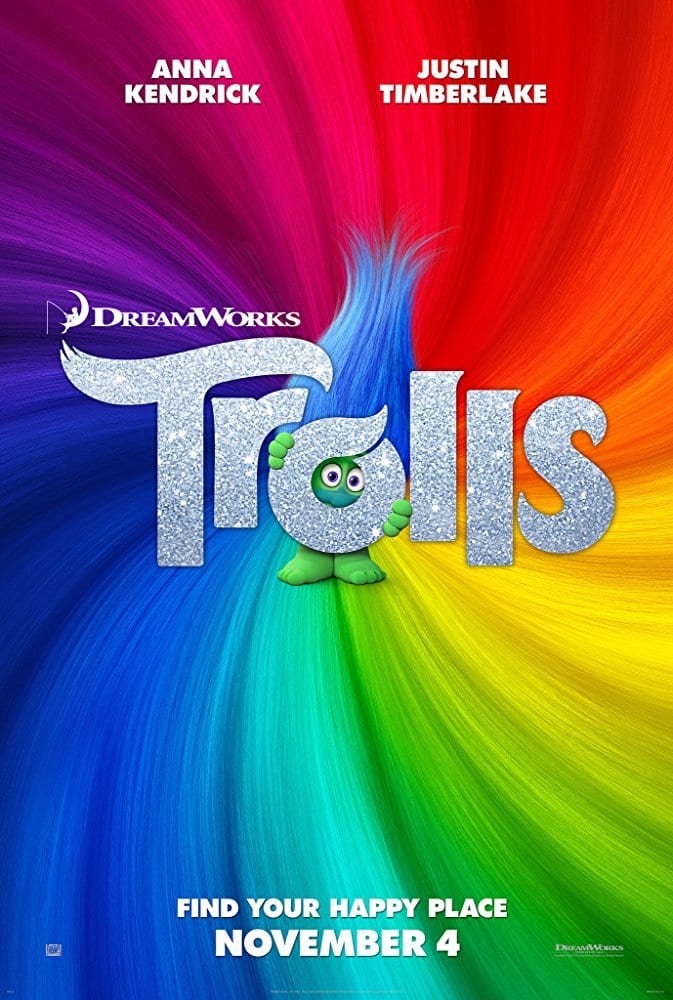 This movie is saved for those moments when all of the music on the radio is boring. We put this on and do a sing-along. Not a single one of us can carry a tune, but it doesn’t even matter. We all feel a little bit better at the end, and an hour and a half has gone by! Score.

Armed with this top ten movie list, you’ll be sure to have an enjoyable road trip… at least until someone has to go potty for the 100th time.

Thanks for reading!  What movies do your kids like to watch on road trips?  Comment down below!

Really creative list, Caitlin! Some movies I’d like to suggest for the list are some of the classic Disney animated films (example: Beauty & the Beast), some kid-friendly musicals (like Annie or The Wizard of Oz), The Tale of Despereaux, Flicka: Country Pride, some Hallmark movies (depending on what your family’s movie genre preference is), and the Marvel Cinematic Universe films (depending on if your children are allowed to watch those movies).