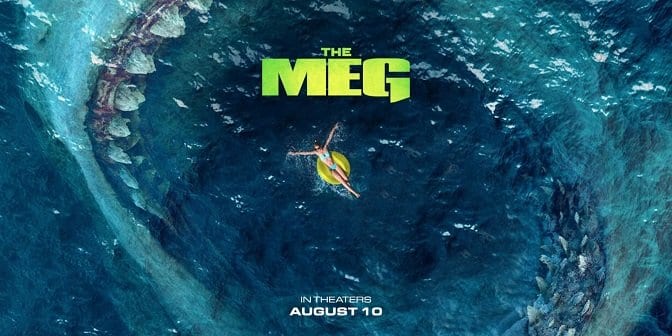 It’s August 1998 and I’m riding down the highway in a Dodge Caravan. The air conditioning is working too well in the front, which has caused everyone to turn down the power so as not to freeze. My buddy and I are now sweating in the back of the van, the lack of AC power ensures the cool air never makes it back to us.

To distract myself from the heat, I look over and see my buddy reading a book with three giant letters running vertically down the front cover: MEG. Almost more centered than the title is a star proclaiming: Soon to be a Major Motion Picture.

Fast forward to March 2018 and I get a text message from that same buddy: “Did you know they were making movie out of that shark book, Meg, I was reading on that vacation when we were kids?”

I do remember and I also don’t think they thought “Coming Soon” would mean 20 years later.

The Meg, follows a group of scientists who discover a 75 foot Megalodon shark. They must do everything in their power to stop it from reaching civilization, and return it to from where it came from.

The past few years have seen the arrival of many big screen adaptations or sequels that we never thought we would see, from The Dark Tower to Blade Runner 2049. That list just got a little bit closer to completion with the arrival of The Meg. This film has been in some form of pre-production for the past 20 years.

Meg: A novel of Deep Terror by Steve Alten is the source material for The Meg. The rights to this story had been sold before the book was even published, and the back and forth those rights experienced has it’s own epic tale (I won’t get into that here). After wondering about the fate of this movie for the past twenty years, I questioned if it would be worth the wait.

And I believe it was worth the wait — that wait made The Meg that much better.

Statham vs a Shark

It’s what we are all here for, admit it.

This movie was definitely pitched to someone, somewhere, at sometime, with the tagline: “It’ll be Jason Statham vs a Shark!”  I have no doubts those exact words were uttered by a film producer somewhere during the pre-production of this movie. The best part about that pitch is this is exactly what you get in the film. There are several moments that they know a Statham-loving-audience will want to see that scene and they deliver in a big way. Statham is one of the few action actors around who can be placed in any situation, no matter how ridiculous, and make it work. He also not only makes it work, he makes it believable.

He has shown this talent many times over, from Crank to the Fast and the Furious  franchise. No one else alive can pull off the things he has been asked to do in such a fashion where you (an audience member) can tell yourself it’s OK you just saw that. Waiting to be able to cast Statham in this role alone makes the 20 years worth it. In the 90’s we would have ended up with a post City of Angels Nicolas Cage, and I don’t think that would have been good for anyone.

What was surprising to me was Statham didn’t need to carry this film alone. The characters in this film are fleshed out and had a depth level that usually isn’t a prerequisite for this type of film. Everyone in the cast was fun, and had the opportunity to showcase their skills and make sure you cared about them. Wilson’s a clueless billionaire and Li’s Suyin is the strong female lead who gets to handle her own business many times throughout the film. They were both quite memorable. Since the film was partly financed from overseas backers it led to a more ethnically diverse cast, and a foreign location was a breath of fresh air to this genre.

The cast all does a great job of showing that their characters are more than just fish food. They also all work very well together as a team to get through the situation they find themselves in. This film checks off all the emotions from humor to sadness, with Statham style action stuffed in the middle. Usually I don’t come into these movies for the human story or their relationships. However, The Meg  plays out in a way where I caught myself thinking that I was happy we get to spend as much time with these characters as we do. That is a rare occurrence in the monster movie genre — one that I appreciated.

The Technology of The Meg

One of the big bonuses in waiting 20 years to make this movie is the technology has reached a point to really be able to deliver this movie in a big way. The shark looks awesome and menacing in almost every shot. Jon Turteltaub maximizes the technology to make everything look believable — I found myself in awe every time I saw that giant fin cut across the water.

Turteltaub did a great job making sure the scale of the shark was never lost on the audience. He was able to use that scale to ramp up the terror in his shots. I appreciated how he was able to transition the camera from above and to below the water seamlessly without being nauseating.  Steve Alten himself even stated that the shark wouldn’t have looked nearly as good 20 years ago.

The technology on display was fun to watch as well. Now, I am not an expert on underwater exploration,  but the ships and technology they used seemed like a flirtation with the futuristic. Yet, they kept everything within the realm of what could be right around the corner. From underwater ships that looked like the Gyrospheres in Jurassic World, to the style of shark cages I have never seen during Shark Week. I appreciated the futuristic approach that this film took.

Everything shared a great balance of believability and fun, which is a must for this type of summer film. 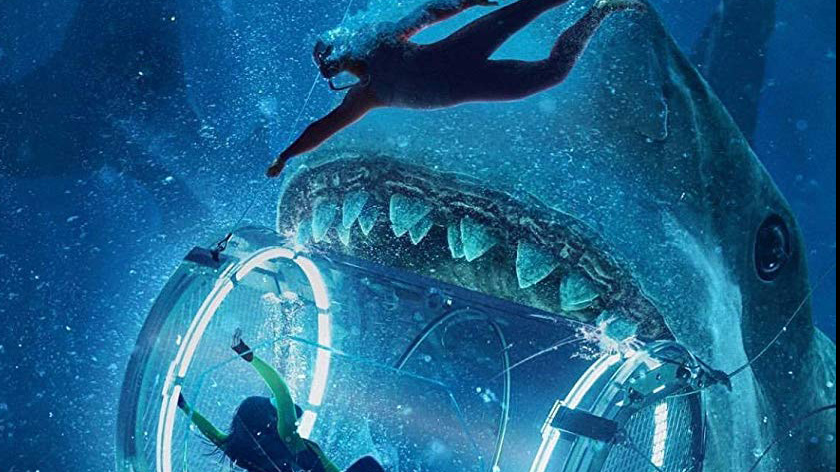 On paper this movie had everything I wanted in a summer film: Giant Monster, check — Jason Statham, check — Water, check. What I didn’t know I wanted was a fleshed out, yet simple, story involving characters I found myself caring about. Sure, they used simple techniques to make me care from time to time, but I didn’t mind.

This film strives for more, and I know it ended up much better than it would have been had it been released 20 years ago. The filmmakers took some time to make sure that every character had a voice and had a moment to touch the audience. I even appreciated when they had moments to talk about the ramifications of man’s need to destroy, and the cost of shark poaching. They were quick moments but it was nice to see them placed in this story. All of these moments happened in such a concise manner that didn’t distract, but were still able to get the point across.

The crowd I saw The Meg with were all excited to be there (there was even one group wearing shark hats), and everyone reacted well to everything this film had to offer. Laughing, crying, applauding, cheering when certain character actors show up. The range of emotions were on full display and I feel that’s the sign of a good summer blockbuster.

The Meg isn’t the greatest monster movie out there, but it strives to be different and it’s own thing — I applaud it for trying. While it won’t be the most memorable movie  out there, it brought a lot of little things with it that made for enjoyable experience. And I felt this was definitely worth seeing — we have all spent worse times at the movies this summer (cough Jurassic World cough). It was a pleasant surprise to see The Meg carve its own path of destruction while simultaneously creating one of the most fun experiences I had at the movies all summer.

Thanks for reading!  What did you think of The Meg?  Comment down below!

[…] actually taken out in this movie. Steve was trained and then he took out like two people in very bloody fashion. You know what I could’ve used? A montage of Steve getting better at being hitman and taking […]

Saw this film last night – wasn’t as bad as I expected to be….it’s better than sharknado but nowhere near as good as jaws! At one point I was half expecting Jason Statham to judo kick the shark! But overall it’s the type of film to watch when your hung-over on a Sunday morning!

I just couldn’t support this film.