‘The Invisible Man’ Exit Survey: A Rare Reimagining that Works

written by The MovieBabble Staff March 10, 2020 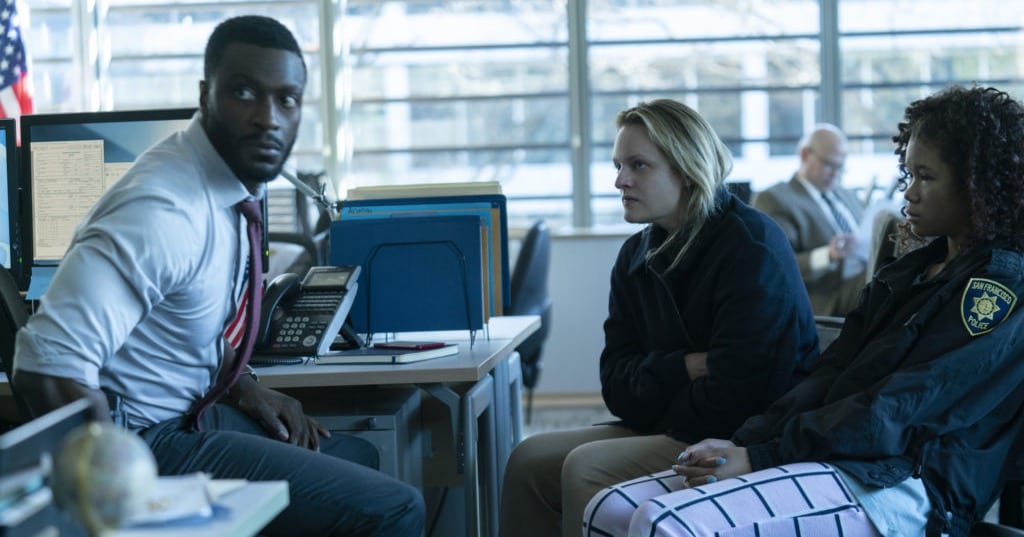 In a time when we’ve all become fairly cynical towards reboots/remakes/reimaginings of classic stories, Leigh Whannell’s take on The Invisible Man managed to push the famous material in an entirely new direction, opting to focus on the victim of the title character’s gross actions. Toss in a great performance from the talented Elisabeth Moss and you have a horror film that will surely make a few year-end lists…and might just restart the belabored Dark Universe that Universal has been trying to launch for years.

Members of the MovieBabble staff break down some of the more noteworthy parts of the film in our The Invisible Man Exit Survey.

Did you like the movie shifting focus to the victim, rather focusing on the invisible man himself?

Sebastian Sanzberro: I did. In fact, the change of focus to the victim was what I found most compelling. The primary question of a remake is what should be new or different, beyond a 21st-century setting. I only wished the second half of The Invisible Man had somehow maintained more of the ominous, near Hitchcock-level suspense and dread of the first hour. Despite my overall satisfaction with it, I was also a little disappointed to see the methodical pacing and eerieness of the movie being gradually replaced with standard revenge/action tropes. The psych ward escape felt very Terminator 2 at times. Did Adrian’s suit give him (or its wearers) extra strength somehow?

Ashvin Sivakumar: Very much. I think the shift is important, not only in adapting the film for a modern audience but also in crafting a timely story that does justice to the history of the character while also exploring new stories that feel fresh enough to engage an audience.

Blake Ison: I really loved the shift in focus from The Invisible Man himself to the character of Cecilia. I felt that this choice helped relay a lot of the film’s ideas to the audience, in the sense that Leigh Whannell was going for a more horror-centric film.

Nick Kush: It’s a great way of finding new material out of such a classic character. The Invisible Man is an inherently devious and cynical character, so even though this version of The Invisible Man is so different that H.G. Wells doesn’t even have a “thank you” credit, it still feels in line with the previous iterations while making ideas of abuse and gaslighting pretty terrifying.

Sebastian Sanzberro: My favorite moment was a very simple one. Cece rings Adrian’s phone…and we hear its buzz inside the attic. A simple trick, but very effective. If current mobiles/cellphones existed in the 1950s, I’d bet that Hitchcock would’ve crafted such a moment in one of his movies. I only wish Cece had the presence of mind to keep Adrian’s phone; its very presence in the house, let alone the photos on it, was valuable evidence.

Ashvin Sivakumar: The final moments of the film are simply cathartic; the same way the ending of Knives Out is just pleasing. It’s not just timely, but it’s such a justified ending. The scene in the restaurant was very well-done too. I’ve not been shocked like that since Charlie got aHEAD of herself in Hereditary.

Blake Ison: The best moment of the film, for me, was the opening scene. It really set the tone for the film and it built up so much tension and fear through entirely visual storytelling, bar one word.

Nick Kush: I love that opening scene! It had a similar effect to the opening of A Quiet Place where it immediately conveyed the tension and desperation the rest of the movie would have as Elisabeth tiptoed around in silence.

The introduction of any doubt into Adrian’s role made Cece’s decision to do what she did slightly less impactful. I was also left wondering if Cece was carrying Adrian’s baby, or perhaps Tom’s?

Ashvin Sivakumar: Not really much of a bad moment in the film, but I feel like the moment where Sydney gets slapped by The Invisible Man, but she thinks it’s Cecilia is lacking. It’s very clear that Cee didn’t do it.

Blake Ison: I don’t think there was a “worst moment” of the film per se, but, once the film shifted its focus and started showing more action, I felt like the film lost a bit of its horror charm. I wouldn’t say this is a bad thing, because I still loved it, but it just lost what it was building upon in the first half.

Nick Kush: The reveal. More specifically, the mechanics of it. Nevermind the fact that the movie merely throws “optics” around and expects that to be a worthy explanation for everything, but how exactly did Adrian fake his own death? Did everyone just take Griffin’s word for it that he was dead? Surely local officials had to see the body before the press release went out, right? Whose body was cremated? Is Adrian an expert in drywall repair?

Sebastian Sanzberro: The paint splash. I knew it was coming, sooner or later, but damn if that paint hitting Adrian’s face on the ladder didn’t make me jump in my seat like a motherf–ker.

Ashvin Sivakumar: Like I mentioned in my answer to the best scene: THE RESTAURANT SCENE! It is shocking and it comes out of nowhere.

Blake Ison: The most shocking sequence for me was when Cecilia ‘hit’ Sydney. This scene was the beginning of Cecilia’s “decline into madness” and it truly made me feel terrible for her character.

Nick Kush: THE KNIFE!!! One of the most shocking and unexpected scenes I’ve seen in a very long time.

Do the science fiction elements of the movie work for you?

Sebastian Sanzberro: I preferred the current version’s optical/electronic suit to old-fashioned chemicals or potions. It’s much more in line with the sorts of ‘cloaking cape’ technology being developed right now. I could buy that sort of invisibility over magic formulae.

Ashvin Sivakumar: It does. It adds a timely and modern feeling to it. It’s also very realistic in its modernity.

Blake Ison: The science fiction elements of the story do work for me, for the most part. Once the suit became visible, the film lost most of its fear factor; however, it made the overall story more believable.

Nick Kush: No, not really. I vastly prefer the tension-filled first half of the movie to the sci-fi-action second half. Leigh Whannell is so good at using negative space, either by panning the camera to nothing or having large sections of the screen, that my eyes were constantly darting around the screen for a sign of The Invisible Man. The horror in the first act and a half is extremely palpable, whereas the science fiction pieces are pretty standard by comparison. The psychology of Elisabeth Moss’ character is far better realized when The Invisible Man is strictly a horror movie.

Would you like to see more reimaginings of the classic Universal monsters? If yes, pitch an idea for one.

Sebastian Sanzberro: I would be in favor of more Universal monster remakes only if the filmmakers would remember what made the original Universal monster movies of the 1930s-1950s so great; the monsters fully-realized characters. Frankenstein’s monster (as played by Karloff) wasn’t just some stiff-walking zombie; he was an alienated child, rejected by both his creator and society. Dracula was a desperately lonely immortal seeking a long lost love, same with Karloff’s Mummy. The Wolf Man was the victim of a curse. The Creature from the Black Lagoon was the closest Universal ever made to a mindless beast, yet the audience still sympathized with it as a member of an extinct species.

The old Universal monsters were fully-realized characters. They were multi-dimensional. They had pathos. They weren’t just lumbering beasts.

I would also appreciate it if the filmmakers would follow The Invisible Man’s lead and give the story a fresh or unique perspective unthought of in the original source material (the H.G. Wells’ novel or the James Whale film). Oh, and cast an actor of Elizabeth Moss’ caliber. I’ve been a fan of hers since Mad Men. She was terrific.

Personally, the only one of the Universal monster films I would like to have seen reimagined was Creature from the Black Lagoon but Guillermo Del Toro beat me to it with 2017’s The Shape Of Water.

Ashvin Sivakumar: Of course! If you look at it, you could count The Shape of Water as a loose take on Creature from The Black Lagoon. If I could pitch a modern reimagining of any of the Universal Monsters, I would probably pick The Phantom of the Opera. I think it would be interesting to see the Phantom placed into a modern landscape, where we explore his fears and setbacks in a very timely manner.

Blake Ison: I would love to see more unique takes on the Universal monsters, similar to this one. I think a good, grounded reimagining of Creature from the Black Lagoon could be really creepy, especially if done by someone like James Wan or something.

Nick Kush: Absolutely! I have a small wish that Oz Perkins would direct a Dracula movie. I imagine him doing something that is deliciously atmospheric and in line with the 1931 version. Especially after watching Gretel and Hansel earlier this year, I think he could do something mesmerizing with that material.

Thank you for reading! What are your thoughts on The Invisible Man Exit Survey? Comment down below!

[…] doesn’t take away from some of Moss’s recent performances, including this year’s The Invisible Man and now Shirley. Moss can take a movie to a higher level in any case, but will her performance […]