‘Money Machine’: Disturbing and Sensational (Not in the Good Way) 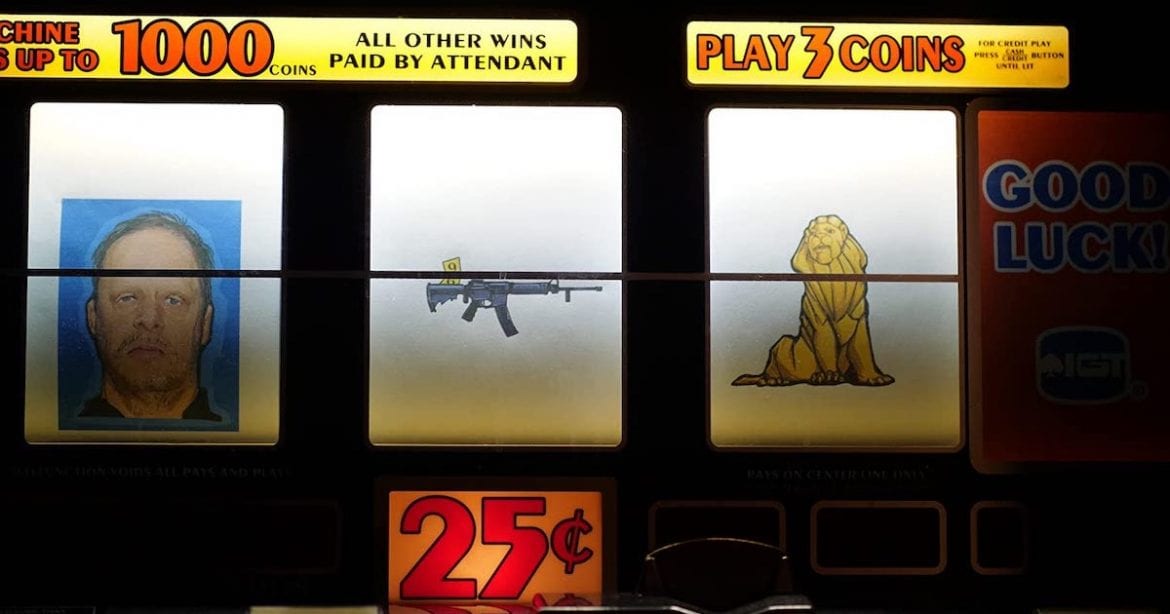 On the first day of October, 2017, tragedy struck in Las Vegas, Nevada. It was the final night of Route 91 Harvest, an outdoor country music festival. An estimated 22,000 people were in attendance. At 10:05 pm, while Jason Aldean was performing, shots rang out. I mention Aldean, because the event somehow became, “that shooting at the Jason Aldean concert.”

Stephen Paddock, perched in his 32nd-floor suite at Mandalay Bay, committed the largest mass shooting in modern U.S. history. It left 59 dead, including the shooter himself (a 60th person died months later from their wounds). There were 869 injured (413 from gunshot wounds). Despite the immense casualties, it is one of the least talked about mass shootings on the ever-growing list.

The documentary, Money Machine, set out to explain why “October 1,” as they call it, is so forgotten.

Painting Too Vivid a Picture

The film starts with the shooting itself, as one might expect with a true crime documentary. However, it’s done in such a way, the viewer is living through the event, not passively reading a tabloid picked up at the checkout counter. The facts are tragic enough on their own, without including such graphic footage and descriptions. I will not provide specific examples. You’re welcome.

To paraphrase legendary film critic Roger Ebert, movies are like machines that churn out empathy. A movie of this nature should absolutely do that. It should make you feel for the victims. Care about them getting justice. Get angry at the fact that, in this case, they did not.

Instead, this segment of Money Machine left me feeling haunted, and hunted. A very real fear came over me. I had to pause the movie, and walk away. After about an hour of watching far lighter fair in another room, I returned to complete the task of watching this. If you are a survivor of trauma, Money Machine will likely be very upsetting.

Honestly, it seems the filmmakers had fun with this part. Like they were making a short horror film, followed by the documentary we signed up to see. The issue is, these were not special effects, or reenactments. This was the actual loss of life, captured on cell phones, surveillance, and body cameras. Actual survivors documenting their lives being forever changed.

While many people have at least some morbid curiosity when these events take place, this film leaves you feeling like you’ve been through it yourself. Yes, the facts are important, but it could have been handled in a far more respectful (and subtle) way.

One thing I was thankful for in this documentary, was the relatively deep dive into the shooter’s motive. It has always been about as clear as mud. The official story is basically: shrug. We will address why shortly.

As this film tells us, via his younger brother, Eric, Stephen Paddock was essentially a self-made millionaire, turned high-stakes gambler. Stephen’s motive for gambling, says Eric, was not to make additional money, but to become a member of casinos’ high roller clubs. In other words, to get lots of free stuff. The man would spend millions, just to get thousands in comps. It was the principle, I suppose.

After a while, however, he started to get fewer and fewer things comped. Less special treatment. He continued to gamble a lot, but wasn’t getting as much back. His finances took a hit. He was angry about that. He thought a mass shooting would paint Las Vegas as unsafe, drive away tourists, and cost the town at large money.

Not only was the shooter’s motive essentially a temper tantrum, but Money Machine presents it as a perfectly valid reason to carry out mass murder. They are fully expecting us to say, “Oh, no wonder!,” and leave Paddock relatively blameless. The real blame, they heavily imply, lies with the gaming industry’s greed. Las Vegas made him do it.

Las Vegas, in turn, made the official motive… no motive. They also seldom, if ever, mentioned Paddock was a man well known to them. The public relations machine went into overdrive to make this go away. In all honesty, though, that’s not as shocking as the filmmakers pretend it is.

In a rare bright spot, this film provides a brief history of Las Vegas, and its transformation from Mafia playground, to complete corporate takeover. Complete with some vintage tourism advertising. It is perhaps an unnecessary addition, but it adds to the film’s overall message that Vegas is more corrupt now than it was under Mob rule.

As the film discusses, the majority of the Las Vegas Strip is now owned by MGM Resorts International, including Mandalay Bay, where the shooting took place. This means virtually the entire town had a motive to help Mandalay Bay save face following October 1.

The #VegasStrong movement quickly spread from social media, to being emblazoned on billboards, banners on businesses, and of course, cheaply made merchandise. It also became a rallying cry for politicians like Sheriff Joseph Lombardo, and gubernatorial candidate Steve Sisolak, both of whom were campaigning at the time. It was Vegas’ way of filtering attention away from the violence itself, over to: “Do your part! Support us!”

Visiting Las Vegas suddenly became the thing to do to show support. And it worked. Tourism actually increased noticeably in the wake of the October 1 tragedy.

Not only did Las Vegas make money from increased tourism after the shooting, but GoFundMe accounts were opened under false pretenses. What were framed as accounts to help pay victims’ medical bills, and lost wages, were instead put into political campaigns. Survivors continued to struggle. Most were unable to work, either for a time, or permanently. And they were left high and dry, while the rich got richer off of their suffering. Mandalay Bay even attempted to sue the victims, to prevent them from getting any money.

After all was said and done, MGM Resorts International received a slap on the wrist. Their insurance covered most of the settlement given to the victims. After said settlement was divided among the many claimants (including the children of many who died), there wasn’t much to be had.

These people will continue to struggle physically, emotionally, and financially, and the money machine keeps running.

Oddly, there is no mention of Paddock’s girlfriend, Marilou Danley, in this film. Nothing about that fact that Paddock gave her a small fortune and sent her to The Philippines just ahead of the shooting. Nothing about the fact that she told investigators her fingerprints would be found on the ammunition, and that she sometimes helped Paddock load his guns.

Perhaps she has lawyers who prevented her from being part of the story. I don’t know. Just another thing to mysteriously disappear in the Nevada desert.

Money Machine is somehow too much and not enough at the same time. So much detail is given in some areas, it makes your head spin (and stomach turn). Some issues that could’ve used exploration are glossed over. It climbs down from its high horse of indignation, long enough to wallow in the gutter of sensationalism.

As the film illustrates, many people used “#VegasStrong” for their own benefit. From corporations like MGM, to politicians like Lombardo and Sisolak, down to the people selling t-shirts. The makers of this film, however, don’t come off as blameless on this issue as they think they do.

Your mental health will thank you for skipping this one. There are things that cannot be unseen… or unheard, as is the bigger issue here.

Thank you for reading! What are your thoughts on Money Machine, and sensationalized documentaries? Comment down below!

My name is Ramsey Denison and I am the director of Money Machine. The idea that we “had fun” as the reviewer wrote, with the sequence of people dying in the opening 10 minutes is beyond ludicrous. We simply used real footage and showed what really happened and the main reason we did this is because so many people have said that the shooting was a false flag event staged by the government… that the people dying were crisis actors… well our harrowing opening sequence blew the lid of that nonsense. That was the objective. Not to “have fun” with people dying.

Secondly… a glaring omission? We didn’t go into the shooter’s girlfriend Marilou Dannely because there we did extensive research and there was no conspiracy there as the reviewer seems to think there was.

It’s about 3,652 times easier to crap on a movie with a nasty review than it is to make one and our team busted our butts to complete this one. Fortunately many of the 1 October survivors appreciate our movie even though the reviewer does not.

I will be releasing my deep dive into the mind of Steve Paddock. It should be interesting and I go into my interview and relationship with Eric Paddock. I am not monetized so I assure you I am not sensationalizing this event.

That sounds far more interesting than this doc was. :)

Thanks for the review. I’ll be sure to give this one a miss.

‘Murder by the Coast’: When Injustice Is Served