‘Lara Croft: Tomb Raider’ Is Absolutely Ridiculous…But I Like It 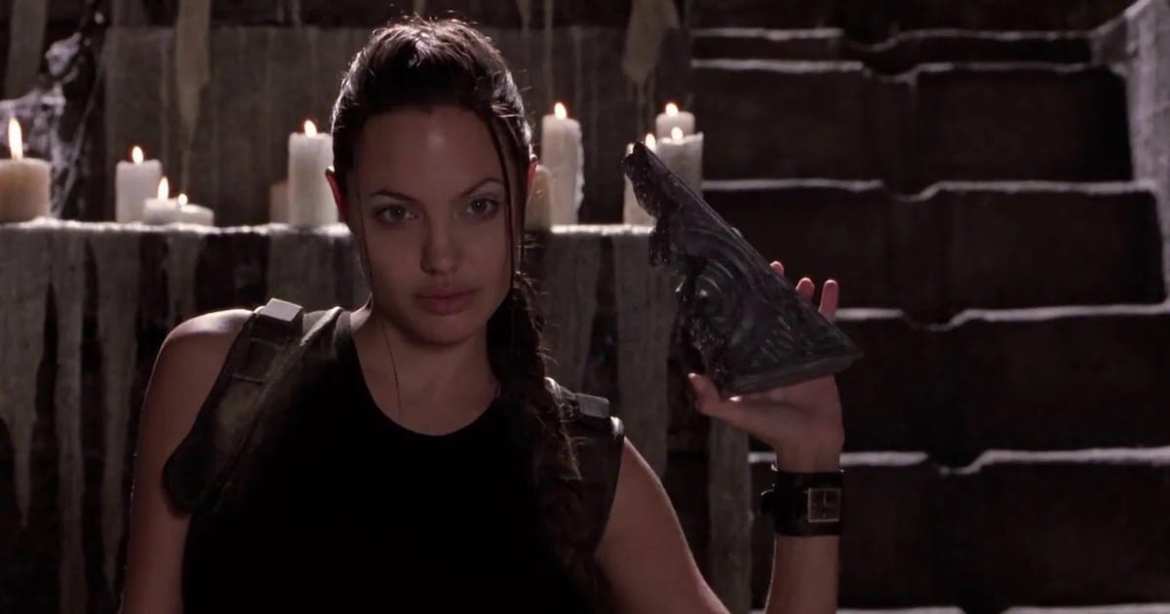 Seriously, what is up with Lara Croft: Tomb Raider? It is the most insane movie at times and for really no good reason. The Illuminati plays a big role in the plot and also Daniel Craig is there for some reason? And there are also magic monks in Cambodia in what looks like the set of Apocalypse Now?

Lara Croft is like the epitome of a guilty pleasure movie. The plot has little to no substance. Conflict seems to be resolved quite easily. And none of the loose ends are really tied up at the end. Yet, it sure is fun to watch.

While there is no actual nudity in this movie, there’s quite a bit of teasing and I really don’t know why. Sure, Angelina Jolie is good-looking. But, was it necessary to give us the odd sideboob at the beginning of the movie? Was director Simon West afraid we wouldn’t stay for the rest of the movie if we didn’t have a little tasteful sideboob? I can assure you that I was hooked from the moment Lara pulled out her Party Mix CD in the middle of a fight.

And that’s not all the nudity we get in this movie. We also get a completely naked Daniel Craig (obscured by various props/scenery) terrifying poor hotel workers. There’s also no reason for this but I guess it makes sure the female audience is watching as well. I know I certainly was.

On another note, a fun game I like to play with every Daniel Craig movie is, “Will Daniel Craig get naked or not for this movie?” More often than not, the answer is yes, he will get naked.

Look, I know not all stunts are real in movies. In fact, a good majority of them are done with wires, harnesses, and CGI. But at least most movies try to make it look like they’re a little realistic or doable by the average slightly athletic person.

Lara Croft: Tomb Raider really said screw that and decided that none of the stunts in this movie needed to look realistic. In the first five minutes, Lara does an insane backflip that somehow slows itself down midair. Definitely not wires and really just the power of Lara Croft.

Not every stunt is faked like this, but I noticed quite a few. Did it ruin the movie? No. In fact, I would say it made my viewing experience all the better. Why embrace reality when you can completely ignore it for an hour and forty minutes?

I remember the Illuminati being a joke in the late 2000s, so having it as a major plot device for Lara Croft: Tomb Raider just made me giggle. And could they really get no one more menacing than Iain Glen for the villain? Every time I looked at him he looked like he was trying not to laugh at some silly little joke he’d just told.

Look, I realize the Illuminati is supposed to be scary and mysterious, but it’s just been ridiculed to death at this point that it’s just so funny to me. I kept having flashbacks to those ridiculous YouTube videos where they would find a barely distinguishable triangle in the most random of places and tie it back to the Illuminati.

My favorite thing about the group’s addition to the movie is that there is literally no reason for it. It could have been any old gang of baddies trying to gain ultimate power, but the Illuminati ended up being the final choice for some reason. They’re just so evil and triangle-y.

This movie ends without really resolving anything. Lara kills the bad guy, she goes home to her unexplainably large mansion with her companions who have ill-defined relationships with her. Despite the fact she straight up kisses Alex West (Craig) during the climax, that relationship is not tied up either. Also, Lara’s dad is part of the Illuminati as well, but we won’t dwell on that.

I love how Lara Croft just ends. There’s no attempt to make everything nice and tidy at the end. Nothing needs to be explained. Lara is a badass tomb raider. The end. You wanted more? I’m sorry, but this just isn’t that movie. We fight ancient beings and then we go home. Don’t be so greedy and ask for substance or plot.

Normally, a cliffhanger of sorts like this would really anger me. You’re just not going to give me anything else? I’m supposed to fill in the blanks myself? But with Lara Croft: Tomb Raider, I’m okay with it. Much like a video game, I don’t necessarily care enough about the story for it to be resolved. I’m just happy to be along for the action-packed ride.

Who Are All You People?

There are a lot of characters introduced in name but not in character. We get to know the bad guy, Manfred Powell (Glen), but we have no idea why he’s bad. Why does he want unlimited power? Who knows? And who’s the little sidekick who’s always with him? We also don’t know because it’s really not important.

Then there’s Alex West. He is introduced as obviously some sort of old flame. That’s it. We know he kissed Lara at least once. That’s cool. We’re moving on. Oh, and we’re also supposed to see him as some sort of douchebag? Cool, got it. Do another flip, Lara.

Once again, I’m fine with this. I don’t need to know everyone’s name or inner desire. And I don’t want to spend precious fighting time on dumb stuff like love and feelings. I want to see Lara kick more ancient beings’ butts and spend all her bullets on one enemy. That’s the good stuff.

Thank you for reading! What are your thoughts on Lara Croft: Tomb Raider? Comment down below!