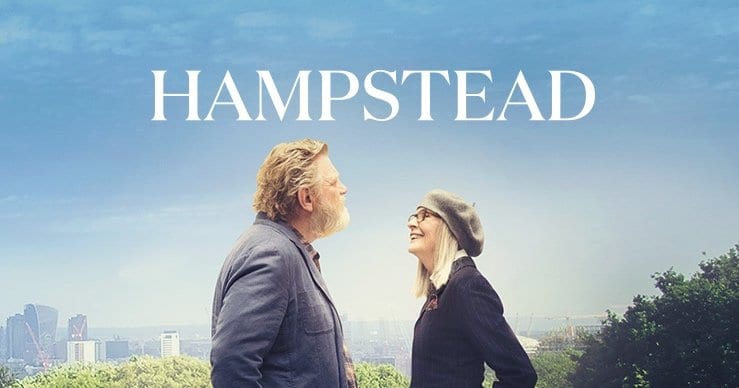 When I reviewed Welcome to Marwen in 2018, I lamented the fact that many movies “based on a true story” seem to add in a love story. Even if the real story did not contain one. Heck, they even did that in The Pianist, of all things (Dorota, the cellist, did not exist). Well, here I am, complaining about the same phenomenon again, this time with Hampstead.

The real story that inspired Hampstead would have made for a compelling film itself. Instead, we were served a comedy/drama/romance salad, with aspects of the real story as dressing. This movie was initially released almost exactly two years ago in its native Europe. Going in, I wasn’t sure why it took until now to arrive in the states. Now, I think it was probably due to a lack of interest.

Emily (Keaton) is an American living in London’s charming (and seemingly expensive) Hampstead area, re-adjusting to life in the year since her husband’s death. Friends and family try and direct Emily’s path, and she hasn’t quite laid one out for herself. Donald (Gleeson) is an Irish expatriate also living alone, in a so-called “shack” he built from found items. Donald lives off the grid, so to speak, not depending on anyone else. He also happens to be doing so on land worth quite a bit of money to developers, and they want him out.

Enter Emily, who takes it upon herself to help Donald remain in his home. She springs to life with this newfound sense of purpose, and seems grateful to have something to do. She and Donald are quickly enamored with each other, despite butting heads. The now-intertwined stories then play out: Donald’s battle for his home, and his blossoming romance with Emily.

The story that inspired the character of Donald Horner, and his housing situation, is that of Harry Hallowes. Like Hampstead‘s Donald, the late Harry built his home on a slice of land in the title town, and lived there for years. Like Donald, Harry originally hailed from Ireland. Harry, it seems, was also as feisty as his fictional counterpart. When asked about this movie being made, Hallowes had zero interest in discussing it. There are more similarities between Harry’s legal battle, and Donald’s, but providing further details would constitute spoilers.

All of this, however, is a subplot in the movie Hampstead, as Emily is set up as the main character. It’s actually kind of odd that these two stories become one within this movie. It’s almost as if screenwriter Robert Festinger was stuck in the middle of writing a story about a bored widow, and spotted an article about Harry Hallowes. 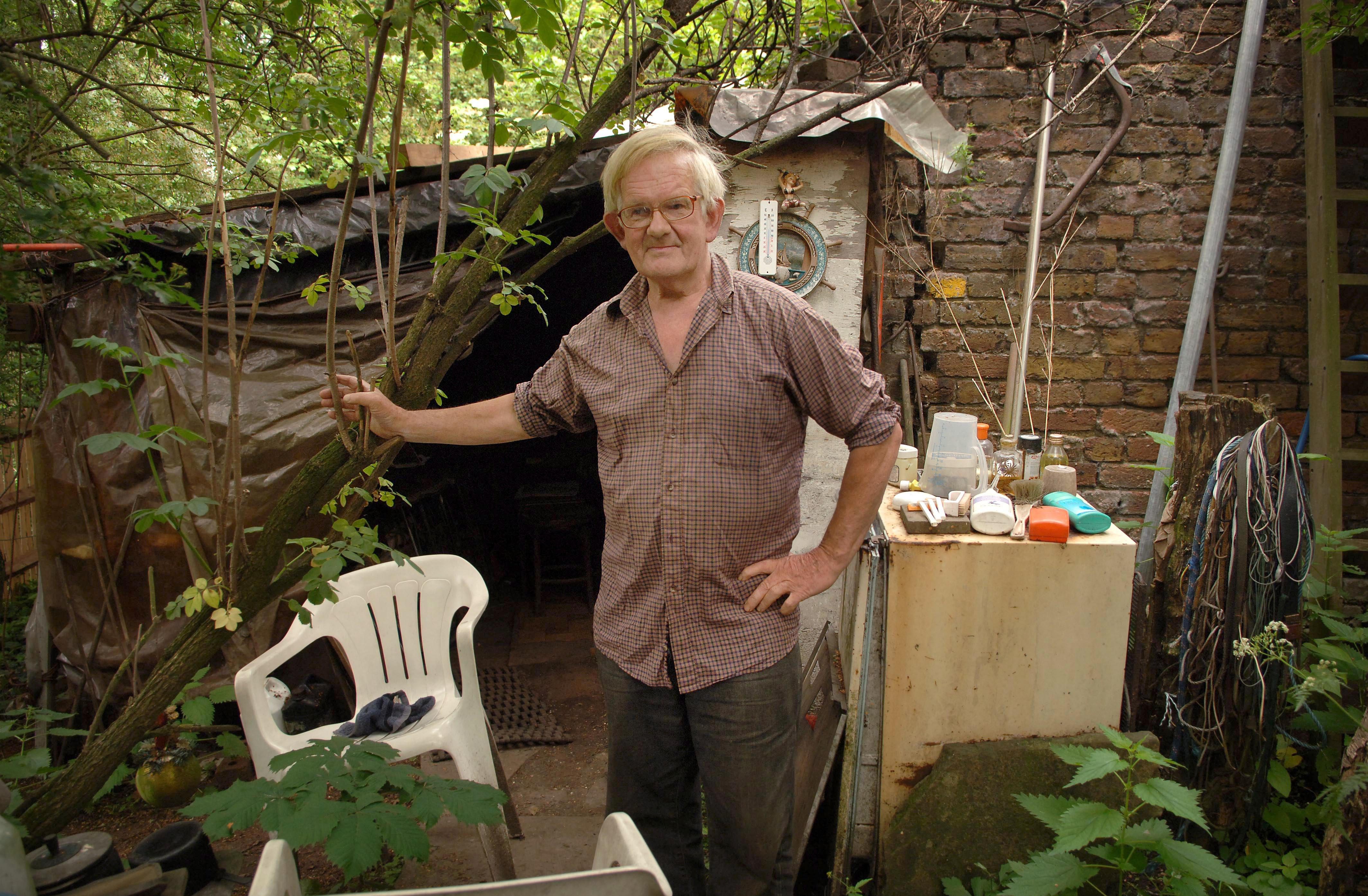 By now, you may be under the impression that I hated Hampstead. I did not. It’s just that I wanted to enjoy it more than I did. Honestly, despite it being an absolute mess on paper, the story actually works much of the time. I believe the reason for this is the casting of Brendan Gleeson. Gleeson absolutely nails all aspects of this movie. He does the curmudgeon routine particularly well, and softens slowly, not all at once. And never completely. Donald was likely less fleshed out in the script, but Gleeson made him a real person. His reactions and expressions never betrayed the character. He was true to him throughout.

This movie would not work as well as it does with anyone else in this role. It just wouldn’t. 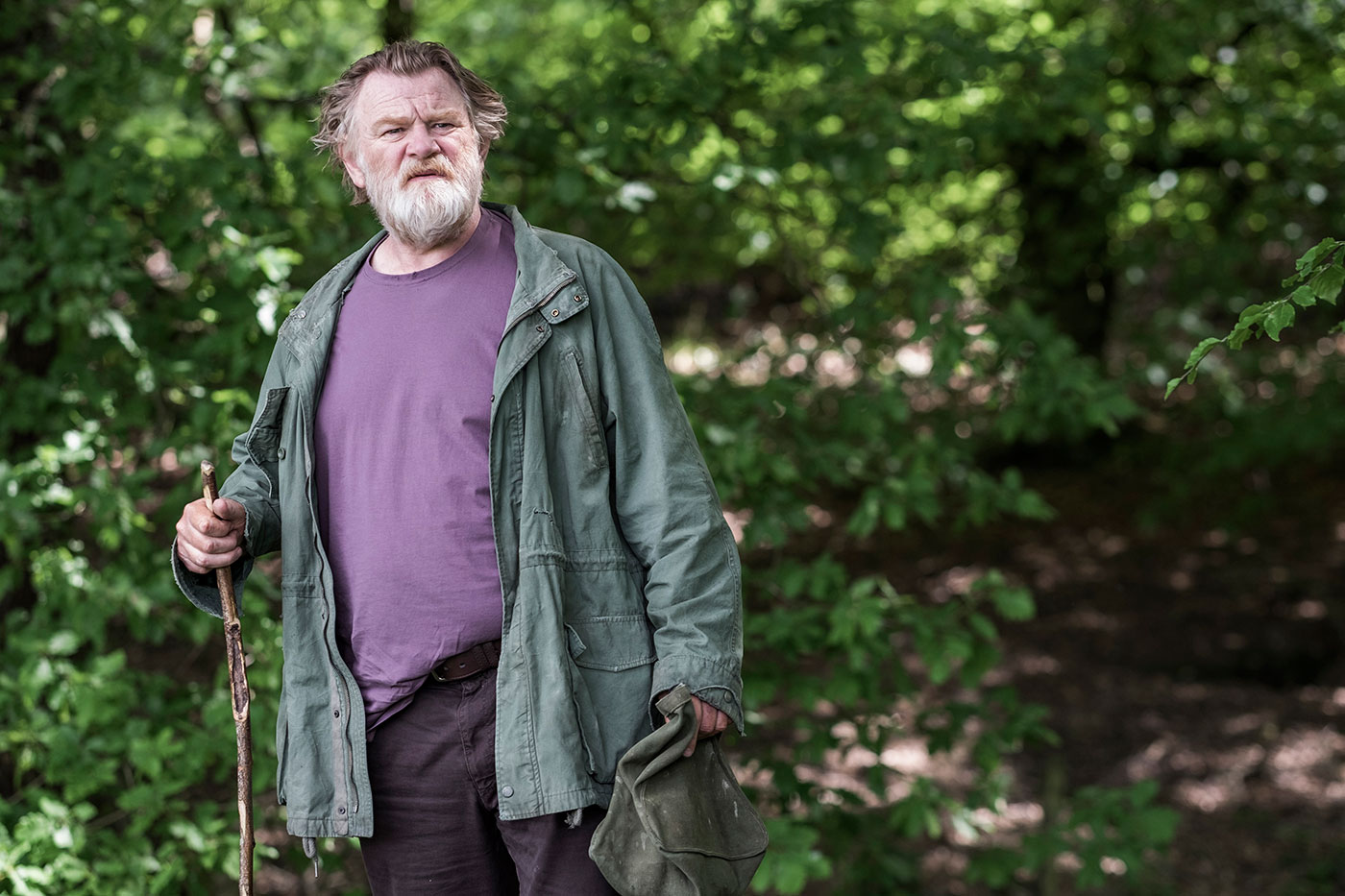 Diane Keaton, while charming, was uneven, and… a little meta. Basically, she was Annie Hall off and on in this film, when it didn’t fit her character at all. Keaton was dressed in Annie’s quirky, free-spirited style part of the time, but Emily wasn’t a quirky free spirit. In fact, Emily was basically repressed. Now, this may not be all Keaton’s fault, as the filmmakers might’ve wanted to work in nods to the classic character. They were likely Keaton fans who thought, “How about Emily looks at a beret in a shop window, and scoffs at the idea of getting it? But then she gets it later.” Gold, I tell you.

Despite the fact that she and Gleeson really do make a sweet couple, I still have to say Keaton was miscast in this part. She seems to be pushing her character to do more than she is. Gleeson did the same, but he was far more successful in his endeavors. 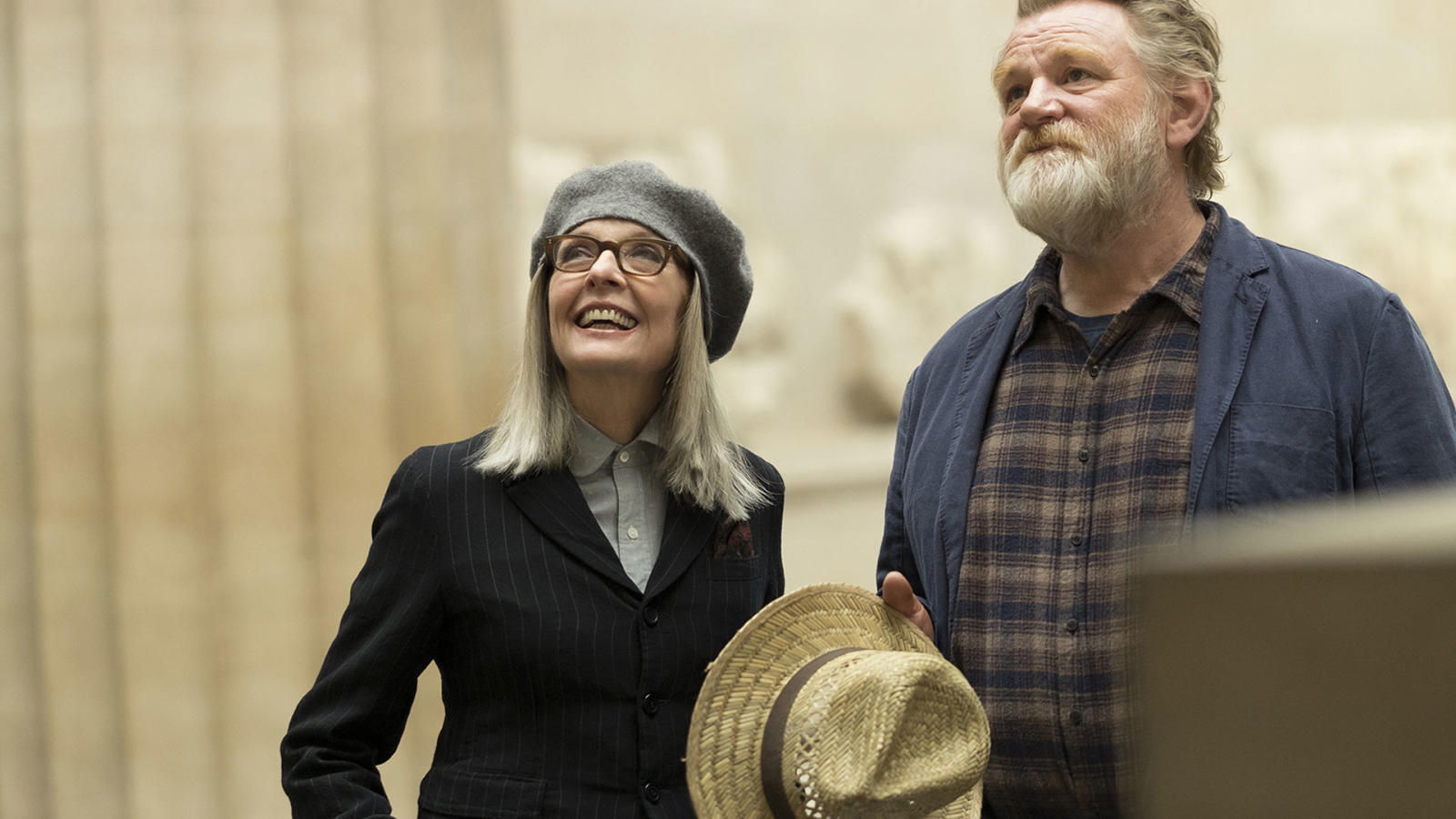 Annie Hall in her later years. Image via IMDb

The supporting cast is quite solid, here. I especially enjoyed Lesley Manville as Fiona, kind of an older, more subtle British version of Regina George from Mean Girls. Fiona was so unlikable a character, she made Manville instantly likable for playing her so well. Also fun was Jason Watkins, as Emily’s financial advisor, and potential suitor, James. Again, it is James’ utter lack of charm that makes him so charming. He grates on the nerves, and gives you the creeps, but he is supposed to. That’s him awkwardly over-singing “Happy Birthday” in the trailer.

My favorite supporting character, though, had to be Erik (Skinner). He is a young “cause of the month” type, who hands out, and hangs up fliers in the town. Erik quickly goes from a stereotype, to a full-fledged person. From handing out fliers about farmed salmon, to helping Emily spread the word about Donald’s home. He organizes a group of demonstrators, and later takes on an even more a hands-on approach. I was very pleased to watch his development throughout the film. I can’t help but hope Harry Hallowes had a friend like Erik, too. 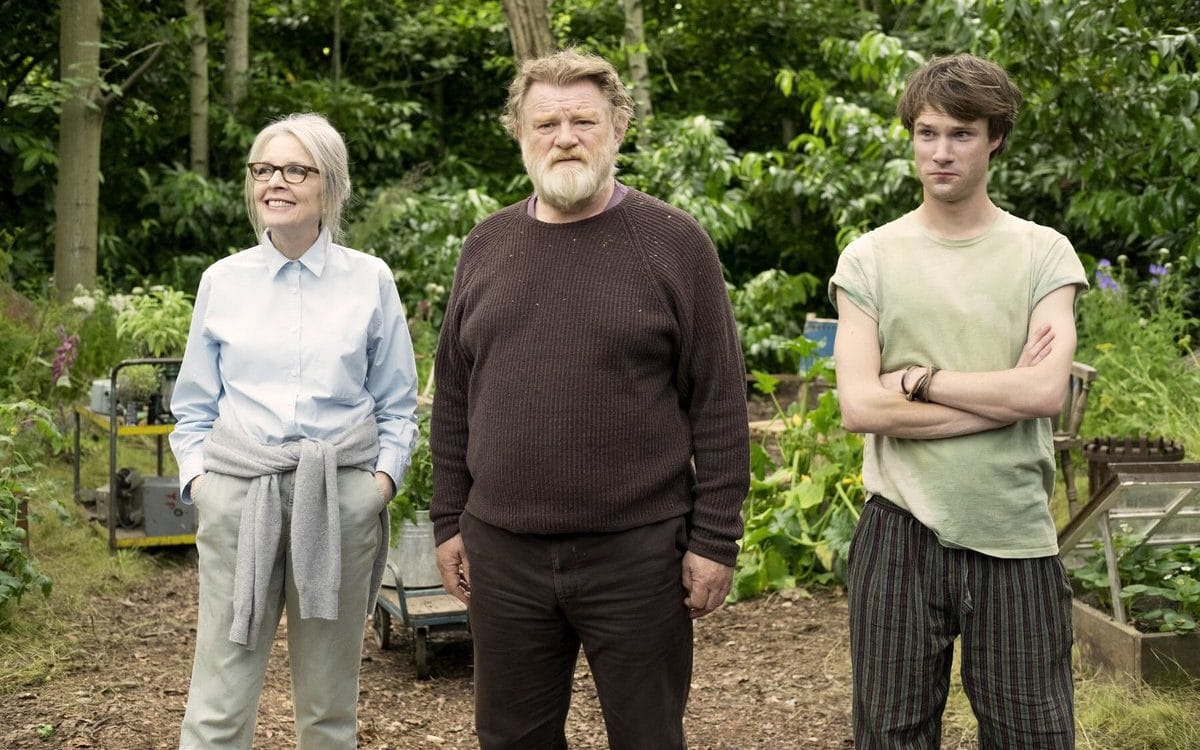 Forgive me for dismissing something so outright, with nothing to be said to its credit. However, it must be said that the score of Hampstead brings the entire production value down. In fact, I commented out loud when I sat down to watch this movie, “I hope this isn’t as bad as the music is setting it up to be.” The score sounds, for lack of a more eloquent term: cheap. It sounds like something to accompany a Lifetime movie, or a low budget independent movie that has to resort to slightly-reworked pieces from other scores. It is distracting. It is worst at the very start of the film, as the credits roll, but it doesn’t improve much.

There are times when a film’s score becomes iconic: Jaws, The Lord of the Rings trilogy, the Star Wars franchise, etc. This is not one of those times. 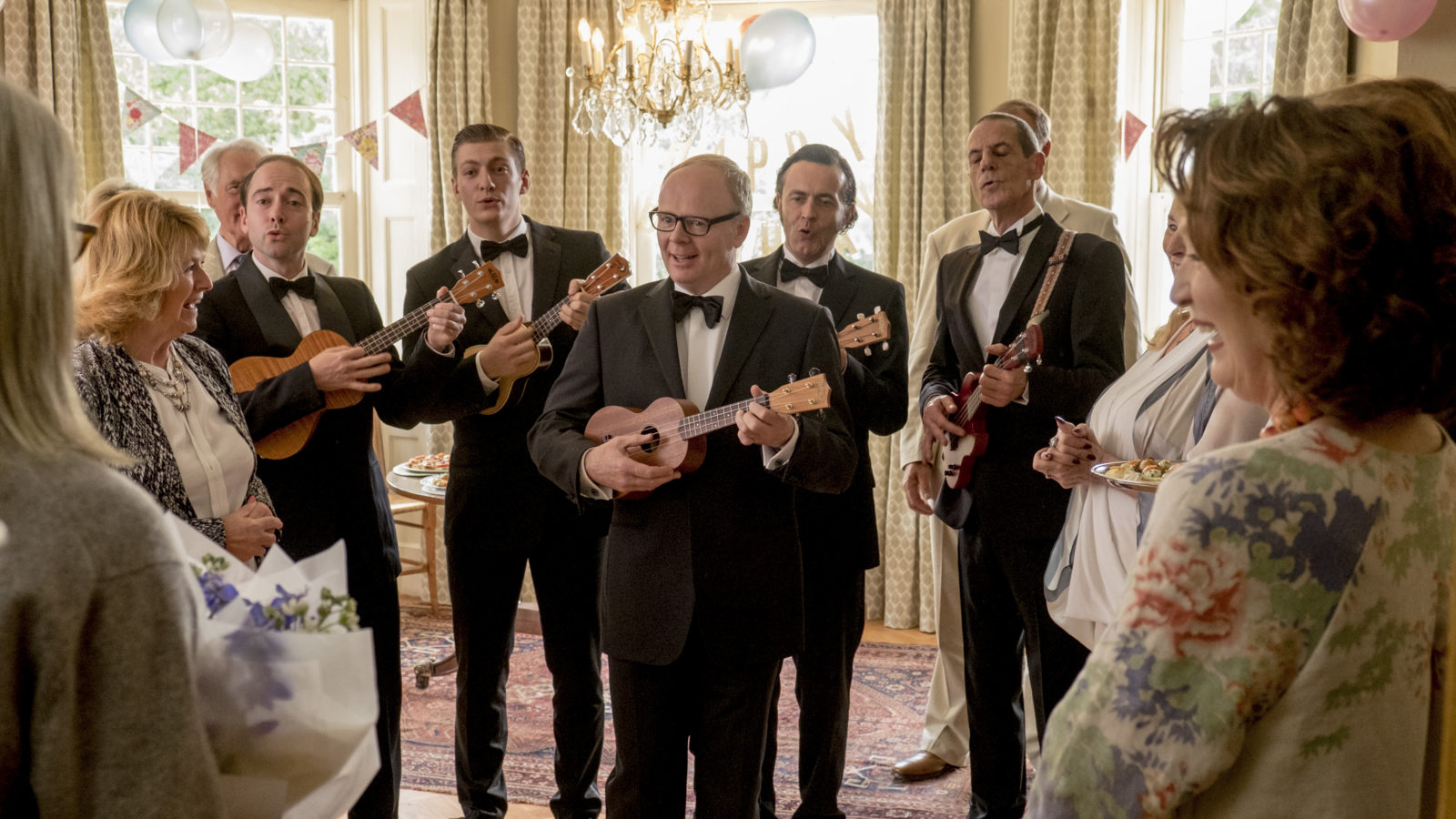 Sadly, this is an improvement. Image via IMDb.

Hampstead has its good points. It is heartwarming in spots, funny in others, and the romantic aspect is kind of cute. Gleeson’s performance is spot-on, despite the shortcomings of the film itself. I feel like the filmmakers successfully told the story they set out to tell. The thing is, they should have set out to say more. These actors (especially Gleeson) are somewhat wasted, when they could have been trusted with far more to do. You might want to pass on this, as the U.S. market apparently did for two years. 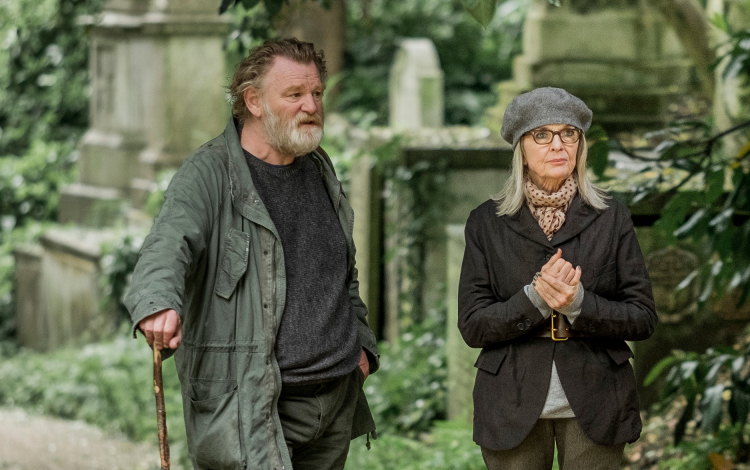 Thank you for reading! What are your thoughts on Hampstead? Comment down below!

[…] Parsons is the headliner here, Tuc Watkins as Hank also stood out to me. There’s a certain scene involving a telephone that completely took […]

‘The Gentlemen’ is a Disposable, Yet Welcome Return...