‘The Night House’: Another Winner for Female-Driven Horror Movies

And for Rebecca Hall too! 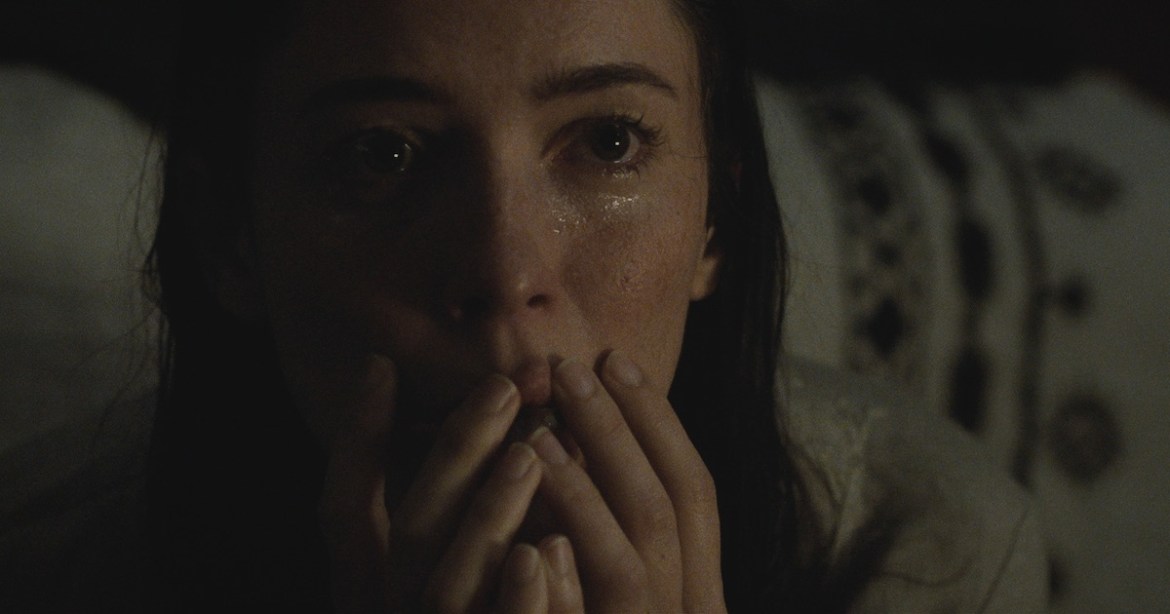 The Night House opens with Beth (Rebecca Hall) returning home after her husband’s funeral. She lives inside a luxurious lake house, itself designed by her late husband Owen (Evan Jonigkeit). Owen’s death was self-inflicted. It was also sudden, since there was never any indication that he suffered from suicidal depression. Seemingly out of nowhere he decided to end his life. He just got up one night, went down to the dock, floated on a dinghy by the lake, and then shot himself in the head.

A note was left but it revealed little about his reasons: “There is nothing. Nothing is after you. You’re safe now.”

The note harkens back to a near-death experience Beth suffered when she was seventeen. She had only told Owen what she had experienced in her clinically dead state: nothingness. There was nothing out there. No light. No warmth. Just nothingness.

Questions haunt Beth’s mind. Did she even know this man she was married to for nearly fifteen years? She receives support from her best friend Madelyne (Stacy Martin) and a helpful neighbor, Mel (Vondie Curtis-Hall), but no matter how many people empathize with her grief, the pain remains. Most nights, Beth drinks herself to sleep.

As she delves into her husband’s phone, she finds a picture of a woman who looks nearly identical to her. Did her husband have an affair? A search on his laptop leads to the discovery of countless other pictures of similar-looking women. As she searches through her late husband’s belongings, she also discovers he had a particular fascination with the occult. Something she had never known before. In an abandoned notebook she also finds diagrams of a house her husband was designing.

Soon after, she begins to suffer from terrifying nightmares. One involves a ghostly voice leading her to a house that looks identical to her own, but everything is backward and every room is occupied with similar bodily and facial features.

Beth’s investigation soon leads to an obsession. Deep down, she knows the answers might be terrifying but she persists nonetheless. She can’t live with the unknown.

But the truth might be more than she can handle.

I saw the trailer of The Night House during a screening of Don’t Breathe 2. It immediately intrigued me since it didn’t reveal much — which has always been a miracle when it comes to movie trailers. From what I could gather from the trailer, the true horror within the narrative could have been many things. Will Beth encounter doppelgangers? Had her husband accidentally found a portal to some sort of mirror universe? Was her husband dabbling with some dark forces that seek to claim Beth’s soul? I wanted to know and bought a ticket the moment I could.

There was also the pleasant presence of Rebecca Hall, an actress who I’ve always admired. If you have even a slither of doubt about her talent, watch 2016’s Christine (no, not John Carpenter’s vehicular horror classic). Her performance as Christine Chubbuck, the mentally ill reporter who famously committed suicide on live television, is chilling.

Yet her performance as the bereaved Beth might be a career highlight. It’s another one of the staples of great female performances of the horror genre. Her performance deserves to be mentioned alongside Essie Davis in The Babadook, Toni Collet’s in Hereditary, and Florence Pugh in Midsommar.

Thematically, The Night House is even similar, as it’s a horror film dealing with the theme of grief — as with the excellent 2020 film, Anything for Jackson. Grief might be the greatest monster of the human experience. The loss of a loved one can lead to us permanent desolation. It makes all the more sense to portray this emotion in the horror genre.

Grief can express itself in different ways. In The Babadook, the main character’s inability to deal with her grief led to the invitation of a picture-book monster. In Hereditary, grief made the main character susceptible to occult forces. In Midsommar, the main character’s toxic relationship leads to a grotesque exacerbation of her grief — the fact that she finds herself stuck in a commune of a sinister Scandinavian cult doesn’t help either.

Beth’s grief-stricken journey leads to an obsession for answers. But as we’ve seen many times in cinema, the pursuit for answers can lead to someone’s downfall. As the presence of the supernatural specter makes itself increasingly and aggressively known, one wonders why Beth doesn’t move from her house. We all know that frustratingly stupid decisions from characters in a horror film are plentiful, even clichéd. Smart characters make smart decisions, and usually don’t follow a spooky sound in an eerily abandoned house. Stupid characters do. Their brutal demise is all for our enjoyment.

Yet sometimes the stupidity can be too much. But in the case of The Night House, similar to all the characters in the aforementioned horror films, Beth’s decisions make sense. Beth is desperate for answers, pushing her to act irrationally, leading her to the increasingly dark abyss portrayed on screen.

The Night House is as much a psychological drama as a supernatural horror film. Though this doesn’t mean it doesn’t work as a horror film. Especially in the first half, the scares can be quite effective. One sequence, in particular, involving Beth being suddenly pulled into a nightmarish dreamscape, could perhaps be one of the best jump scares I’ve seen in a while.

Director David Brucker has made impressive features in the horror genre before. The deeply underrated apocalyptic zombie horror film, The Signal to start with — which he co-directed and wrote with Dan Bush. He made some noteworthy contributions to the horror anthology subgenre, such as directing segments in Southbound and the V/H/S franchise. Most notably, there was Netflix’s The Ritual. Another horror film that managed to feature psychological depth for its main character, alongside its genre conventions.

The film’s dread-fueled atmosphere permeates throughout. We are constantly reminded that someone might be watching Beth. The camera shows enough dark space in the background to make you feel that someone — or something — might jump at Beth at a moment’s notice. Luckily, the film isn’t some James Wan knock-off and never becomes overly predictable. Bruckner is remarkably restrained. Instead of continuous spookfest, The Night House is more of a slow-burn, creeping thriller. Sometimes there’s a jump scare, sometimes not. It never ventures into the ridiculous.

Even though I’m known for complaining about Hollywood’s overuse of CGI, The Night House uses computer wizardry perfectly. There are some particularly brilliant uses of pareidolia in the film.

Some due needs to be given to cinematographer Elisha Christian. While most of the film is draped in darkness, the climax features some beautiful use of dark reds — its poster can give you a hint of Christian’s brilliant use of color.

What settled The Night House as a brilliant piece of psychological horror cinema to me, is its final scene. It all ends on a meaningful note that will stick with you.

The eventual revelations to the plot, to the nature of the haunting, might not satisfy everyone. There’s some peculiar vagueness to it. Yet ultimately, the questions we are left with only strengthened the film’s core themes. Similar to The Babadook, it doesn’t have to make complete sense. It’s about what the horror represented, rather than giving a believable explanation of the paranormal occurrences.

The Night House is an adult horror film. It’s not a constant parade of jump scares or a gorefest (in fact, thinking about it, this film might almost be bloodless). It’s an intimate, uncomfortable study of grief and how we deal with the internal monsters inside us. How that deep down, we might not want all the answers — especially when it comes to the questions of what happens after we die.

It’s about how alone we can feel when someone so beloved suddenly leaves us, and how that void, that terrible life-sucking void, can haunt us for the rest of our lives.

Thank you for reading! What are your thoughts on The Night House? Comment down below!