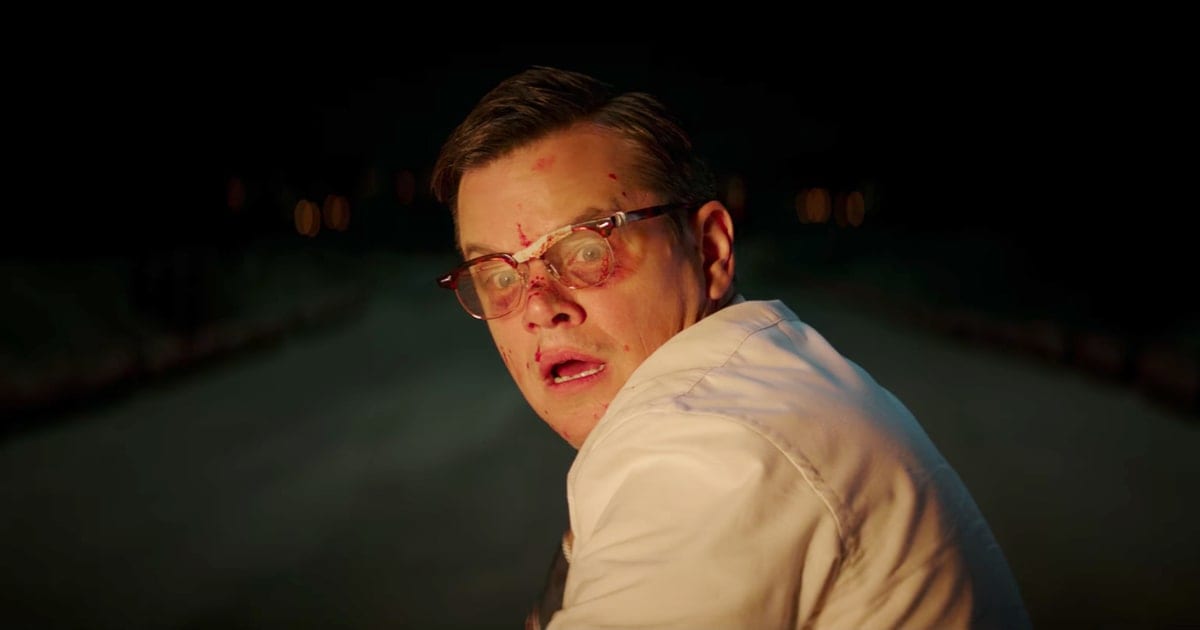 To put it bluntly, there were a lot of pretty terrible movies that came out in October.  From films going for awards that are way too far outside their grasp to popcorn flicks that skimped on the entertainment, there was about a 50/50 shot that you left the theater disappointed during the month of October.  Here are MovieBabble’s worst movies of October 2017:

Jackie Chan showed that he’s very capable as a dramatic actor, but may not be the most adept at choosing the correct projects.  The Foreigner plays out as two different movies, one with Chan as Rambo and another with Pierce Brosnan as a politician fighting terrorism and the IRA.  Neither part works very well together, leading to a less than satisfying endeavor.

The Foreigner falters mightily from horrible pacing.  There’s a ton of sitting and talking.  Then, there’s standing and talking.  After that, there’s even more talking.  Every half hour, there’s a solid fight from Jackie Chan, but it wasn’t enough to overcome the inevitable slumber that you fell into by the hour mark.

Director Martin Campbell tried to channel Casino Royale with this film.  But, that’s just not the case as The Foreigner easily falls into the worst movies of October 2017.

*To read my full review of The Foreigner, please click here.

#2: The Mountain Between Us

The Mountain Between Us has two great, beautiful leads to power the movie.  It’s too bad that the movie suffers from fatally flawed writing in the end.  The film was pitched as a survival film between two strangers that are stuck somewhere in the mountains in the Midwestern United States.  But, we all got something different that just doesn’t work at all.

A relationship develops between the two leads in one of the most groan-inducing turns of recent memory.  In a blink of an eye, Idris Elba and Kate Winslet immediately fall for each other after days of bickering in the freezing cold.  Realistically, their relationship is the one item in the movie that absolutely had to work for the movie to be watchable.  But did it work?  No.

Instead, we’re left to to watch a nearly two hour movie that feels closer to four, dragging until one of the cheesiest final shots in film occurs.

*To read my full review of The Mountain Between Us, please click here.

Suburbicon is best described as a serious misfire.

The world within Suburbicon is very neat, giving off an authentic 1950’s aura that works down to the finer details.  But, the story within the world is an entirely different story.  George Clooney tries to handle a story that contains a murder mystery, comedy, and social commentary with none of them really working.  Each element has a negative effect on another element, adding up a movie that’s as frustrating as it is not entertaining.

To make matters worse, the social commentary aspect of the film feels horribly cheap and fake, failing to truly say anything beneficial on race relations in this country.  Clooney treats it as a side story that never weaves into the main plot with Matt Damon’s character.  Alternatively, a black family is the target of a bunch of protests by an all-white community.  With no kind of resolution in sight, the entire process feels dirty and mean-spirited.

Do yourself a favor and stay away from this one.  It may be the most reprehensible of the worst movies of October 2017.

*To read my full review of Suburbicon, please click here.

In a new section to these “best/worst of” article, we’ll take a more formal look at films that I didn’t get a chance to see for whatever reason but would probably be among the other contenders on the list above.  Let’s face it, sometimes, even critics need to have standards.

The latest Madea film was a moderate hit with its target audience, but it still managed to be a critical failure, earning a sub-10% Rotten Tomatoes score.  After Boo! was a rousing success for Tyler Perry and Lionsgate, the sequel was quickly produced just so that Boo 2! could get released merely a year later.

You know your film’s bad when the director tells you to stay away from the theaters.  The Snowman boasted a great cast that included Michael Fassbender, Rebecca Ferguson, and J.K. Simmons and was even based off of very popular source material, but issues in production made this film crumble.

Universal reportedly halted production before director Tomas Alfredson could finish it.  Alfredson exclaimed that there was about 10-15% of connective tissue that wasn’t filmed, making the final product practically nonsensical.   Better luck next time, Magneto.

Well, we saw this failure coming from a mile away.  Warner Bros. fired the director from the project and brought in famed producer Jerry Bruckheimer to see the project to its end.  However, that cleary didn’t work since Geostorm now has a Rotten Tomatoes score of 15% and is considered by many to be one of the worst movies of October 2017.

Warner Bros. is feeling the heat on this one as the film will reportedly come at a $100 million loss to the company.  Oof.

Thanks for reading!  What are your thoughts on the worst movies of October 2017?  Comment down below!

Even though I stayed away from these films, I would like to comment on a few. Kicking things off with “The Foreigner”, it shouldn’t be too much of a surprise that it’s floundering. After all, this is the first film for director Martin Campbell since the embarrassment of 2011 known as Green Lantern. As far as my knowledge goes, he only has three standout films that are legitimately good: “Goldeneye”, “The Mask of Zorro” & “Casino Royale”. Maybe he should wait for Daniel Craig to step down before he directs again, since he scored big when he kicked off the Brosnan and Craig eras of James Bond. Next, I saw the CinemaSins episode that tackle the original “Boo!” and I couldn’t believe how lazy Tyler Perry has gotten with his Madea character in recent years, constantly shoving in repetitive and insulting jokes that somehow keeps finding an audience and it was somehow popular enough to get a sequel. Most of Perry’s work deserves its rightful scorn. Finally, when I found out that “Geostorm” was originally directed by Dean “Protege of Roland Emmerich” Devlin, it all made sense as to why we got another over-the-top and dumb disaster movie. Also, would you like to know who directed those re-shoots? Danny Cannon, the same guy who directed Sly Stallone’s Judge Dredd. Really? That’s the guy who trust with handling your re-shoots? I’m already dumbfounded on the fact that you trusted someone who worked with Emmerich for years to be your original director, but seriously? Lesson: Crap will always inspire more crap.

Lol I feel like that lesson should be pretty straughtforward. Yet, somehow people in Hollywood still fail to realize it.

Yup! Now, what about your thoughts from the rest of my comment? Don’t fret on being as wordy as you need to be.

I’m a big Martin Campbell fan (Casino Royale) is my favorite Bond film) so seeing his work decline has been just such a bummer to see in recent years. Maybe he does have to just go back to his bread and butter and direct Bond 25.

I can’t really fault Tyler Perry for the Madea character. IMO the character has always been pretty lazy so Boo 2! just seems like par for the course when you ask me lol.

Finally, are you really surprised that someone who worked with Roland Emmerich directed another bad disaster film?

Lol absolutely not. It reminds me of the saying, “dance with the girl you brought.” At this point in his career, that’s all he knows probably ?

Lucky for me, I guess, that I never got a chance to see The Mountain Between Us or Suburbicon. I did however see The Snowman, and I’m betting you’re right that had you seen it, it would have been at least number three on the list, pushing The Foreigner to #4. My picks for the worst movies of October:

3) The Foreigner (the acting was good, and you could feel the anguish and just utter loss of life in every minute of Jackie Chan’s performance, but you’re right… the script dragged a bit without truly rising to any real intrigue);

2) Thank You for Your Service (Again, some really great performances were hindered by a script that truly never understood how to empathize with the characters; I wanted too feel for them and their circumstances, but nothing in the film could bring me to do so);

1) The Snowman (a sluggish film that again couldn’t find a way to bring any intrigue to its dour, sluggish script… and what made it even sadder was seeing Val Kilmer looking so worn and frail, where they seem to have dubbed his voice… just so odd and unnerving).

I heard where they just threw Kilmer in there! Maybe they did that to help his medical expenses since he has a lot of health issues. I’m obviously guessing, but from how odd it sounds I can’t really think of an alternative

If you don’t have a good story, it makes for a difficult film to watch. Of course, you can make the story come alive on the screen with acting and direction, but that only goes so far. I think this is what has kept me out of the theaters lately, especially in LA where movies tend to be pricey, I know that can think of a few movies where the dialogue was okay, but the story was compelling enough to sit through it. The one I can think of is Miracle at St. Anna, but I know how difficult it is to write dialogue that sounds convincing. It is one of the hardest things to grasp and conquer for writers. I will say that good actors are in these movies, but poor concepts/stories or what have you. I’m a little surprised Suburbicon was a bust. Hope all is well with you and school.

Thanks so much for your thoughts! Totally in agreement there! It’s funny how great actor can make things sound so much better than they actually are. It’s always funny to see great actors get fed lines on talk shows and what not absolute nail it!

What the ‘Jurassic’ Sequels Fail to Learn From...