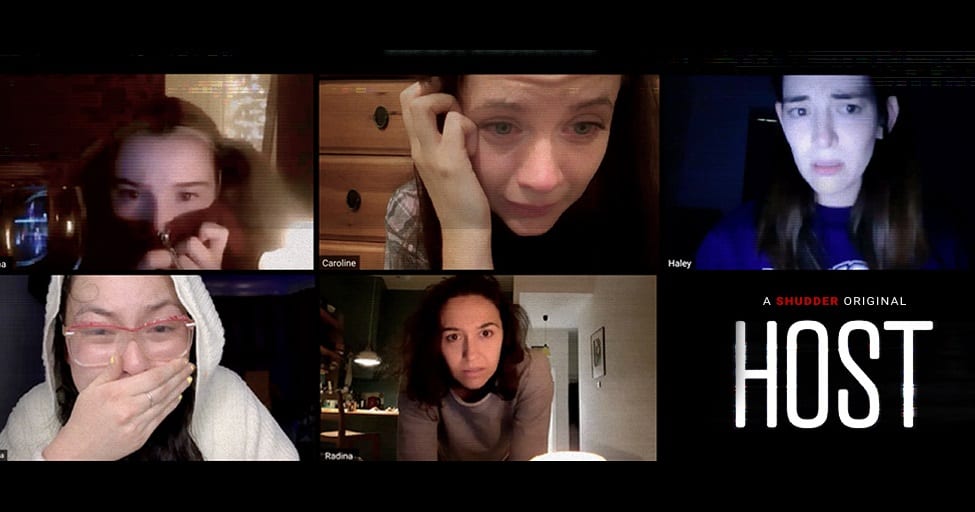 Host was filmed during the COVID-19 pandemic (so quite recently…) and completely via Zoom. It’s based on director Rob Savage pranking his friends on the software, which went viral. (For all the fun, you can find that video here.) This prank has now led to a full feature-length piece.

Found Footage at its Scariest

Considering I am horror film-obsessed, I am fairly familiar with the found footage/Screenlife genre and overall I consider this type of film as quite enjoyable. It’s also a genre that once was an original concept, but by now can feel fairly overused. Webcam film Unfriended even has a similar plot to Host, in that an unknown entity seems to have joined a friend’s group video call. So it’s important that any new film broaching this subject feels fresh. Host manages to do just that.

Host scares without constantly having characters fall to their deaths and without showing too much. This does remind of the original Paranormal Activity, where tension was slowly built up over time; yet Host managed to move this along much more quickly and more confidently. For example, one particular plot point is set up in the first seconds of the film, where our main character, Haley (Haley Bishop), gives herself (and us) a fright by simply opening her closet door and hearing some strange noises. We know this may mean something and are instantly put at the edge of our seats. At times, I was hardly able to look at the screen due to the suspense of the situations, and for such a short film, time moved extremely slow in those moments.

The main characters are a group of friends who plan a virtual seance. Some taking it more seriously than others, leading them to some terrible consequences. I applaud the actors for realistic and natural-seeming performances. I know the actors were given a lot of flexibility to improvise, for example. They also use their real names and some scare responses were genuine due to the actors not knowing when and where the scares would be. Nevertheless, the video calls and conversations the characters had with each other felt like ones I’d have with my own friends.

These natural interactions also helped with providing some context and background on the characters: things like, who is the serious one of the group, and who is the funny one. Once the scary stuff started happening, the dialogues remained natural in its responses. Often I find myself wondering when watching films if a person would really respond a certain way in a real-life version of the situation; in Host, I knew I would most likely behave exactly like the main friends.

When I say feature-length, I default to that meaning somewhere around 90 minutes – 2 hours, but Host is just an hour long. Usually, I find this to be a bit of a cop-out and I often feel there is no way you can tell a full story at that time. In Host, this wasn’t true at all. I got a great sense of all the main characters while understanding the building blocks of the plot.

Part of this might be due to the actors being so believable in their roles and the dialogue feeling extremely organic. Another part may be that horror films can often be so scary that you don’t need two hours of it. I remember going to one of The Conjuring films in the cinema and being so tremendously terrified by it, that I just needed it to end. I liked the movie, but my anxiety couldn’t handle the length of it. Host achieves to scare me just long enough, but as it’s so short I didn’t feel quite as tortured by it.

COVID-19 as a Backdrop, but Not a Character

It was interesting to see a movie set in the current pandemic climate. While addressed in the film, the Coronavirus doesn’t constantly take the foreground. This makes the concept of Zoom even more plausible as a film format; it also ensures the film is not constantly looking for ways to have a camera rolling. The characters can only interact through this method and therefore have no choice but to keep rolling. There are some comedic references to it too, such as a character coughing and exclaiming that we are not able to cough in public anymore. Again, it’s a realistic comment on how we are currently having to approach our friendships and the way we talk about Coronavirus. There’s one moment near the end where, despite the scary situation the characters find themselves in, Coronavirus guidelines are continuously followed; this provided me with some laughs during some of the most terrifying moments of the film.

I can’t find much to fault Host on. It is a great horror film for a night in, especially now that we are spending many nights that way. The COVID-19 backdrop feels comforting at times, as this is the first film during this pandemic I’ve seen where I connected with the plot and main characters on a level of going through something that most movie characters haven’t gone through.

Thank you for reading! What are your thoughts on Host? Comment down below!

[…] Host was an example of a pandemic-shot, Zoom-based movie that stuck the landing. So it can be done. Unfortunately, Safer at Home lands repeatedly on its face. […]

[…] car breaks down, delaying their arrival for the video session. When they eventually get there, a sickness overcomes Miles and they’re taken in by their client’s neighbor. This section of Friends and […]

[…] fact, this isn’t even the first COVID movie! Last year, a horror movie called Host made headlines as it was filmed entirely using Zoom; a large group of directors also teamed up last […]

[…] fifteen-ish years ago, at the beginning of the pandemic, when all those celebrities collaborated on a cover of John Lennon’s Imagine, and everyone […]

George A. Romero’s Restored ‘The Amusement Park’ Is...