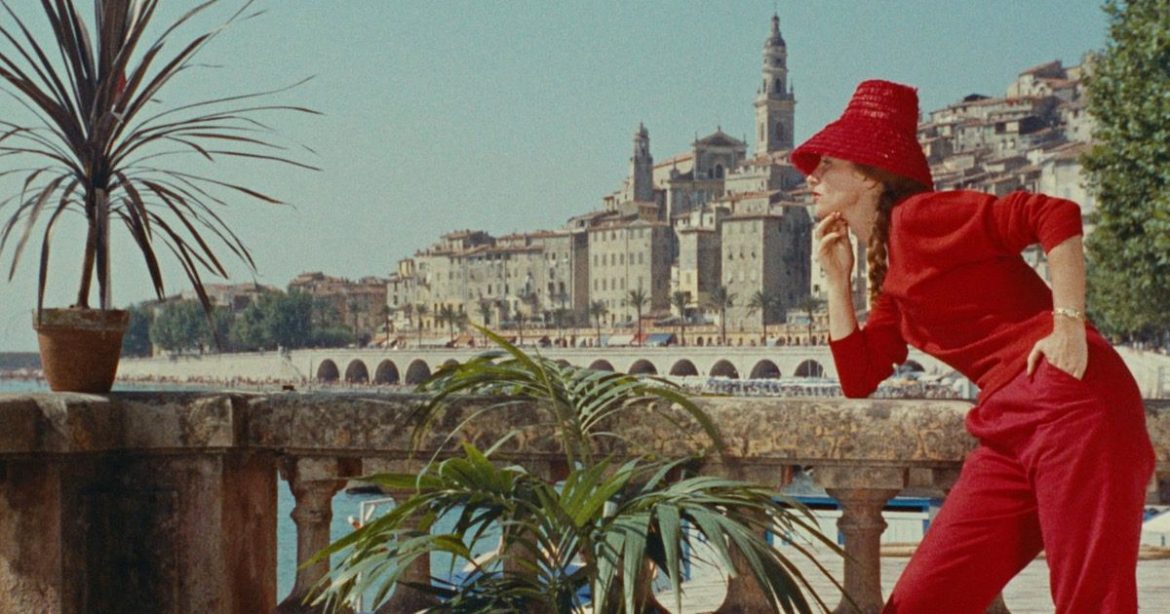 Between directing commercials and birthing her first child, Agnès Varda had a lot on her plate in 1958. But that didn’t stop her from pushing her artistic abilities forward in a most dramatic fashion. Varda plays with color film for the first time in Ô saisons, ô châteaux (and HOW), subverts the establishment using their own product in Du côté de la côte, and pushes her style to new experimental heights with L’opéra-mouffe. Let’s dive in, shall we?

Ô saisons, ô châteaux (Oh seasons, Oh Chateau) is a 21-minute commercial short film commissioned by the French Tourist Bureau, in which we jump around France visiting the many chateaus that one is still able to visit. As we greet each new estate, narrators provide the historical background of the location, as well as occasionally splicing in some poetry.

Too Much to Tell

I’ve had a tough time with Ô saisons, ô châteaux, but I’ll start with the positive, of which there is no shortage. My favorite scene is the opening, in which three handsome old gardeners treat the audience to some music, playing invisible trumpets and striking a pleasantly percussive beat with their brooms as they sweep autumn leaves. Following this, we are treated to twenty minutes of GORGEOUS color photography; the camera luxuriates in filming the majestic, intricate buildings of yesteryear, as well as some lovely paintings of said structures. And every once in a while, Varda gifts us with the sight of two models (who were just kinda hanging out with Varda at the time) dressed to the nines in the latest fashions; their juxtaposition against the old chateaus is absolutely adorable.

If that were all Ô saisons, ô châteaux gave us, I’d be completely satisfied. However, the narration that remains constant throughout the runtime of the commercial loses me. I realize that this may very well be because of the cultural barrier; I do not speak French, and as a result, there are a LOT of subtitles to read. Additionally, the short spends a lot of time talking about the many royals who built and lived in the chateaus. Frankly, it’s way too many names to keep track of if you don’t already know who the narrators are talking about. Even the poetry eventually becomes exhausting; there are simply so many French poets.

To be honest, if you don’t speak French, Ô saisons, ô châteaux plays way better if you turn the subtitles off. That way, you can truly enjoy the magnificent architecture being filmed with such bright, happy colors.

I give Ô saisons, ô châteaux 7 moats out of 9 archways.

The Price of Eden

Du côté de la côte is a beautiful piece of subversive filmmaking. Tasked with exploring one of the most famous locations in the world, Varda refuses to fall into the trap of re-emphasizing the same facades that The French Riviera has built up to draw in the crowds. Instead, Varda turns her camera at the tourists themselves. Crowds overwhelm almost every scene, be it on the beach, on the trails, or on the street during a night festival. People look awkward, crowded and tired as much as they do excited and relaxed. And when Varda does take time to show the sights, they aren’t the grandest of views; we are given close-ups of signs and walls and even more signs. All the while, narrators keep asking: where is the Eden this place claims to be?

However, just as Du côté de la côte has nearly convinced you that the Riviera might not be all it’s cracked up to be: a sunrise over the ocean appears, followed by minutes of uninterrupted music as the camera shows us the idyllic paradise that Varda has been hiding. I especially liked this scene because the narrators stopped talking for a while. And then. The commercial ends by stating that what it has just shown, which is the best the Riviera has to offer, is denied to the public by the rich, cueing shots of gates being closed in the camera’s face.

The absolute guts Varda had! I love it.

I give Du côté de la côte 2 sunrises out of 3 Brigitte Bardots.

In between shooting the commercials for the French Tourist Bureau, Varda decided to have a child. And like many mothers-to-be, Varda kept a diary of her thoughts and feelings about what was happening to her and what was to come. However, Varda, forever the atypical, borrowed a camera and filmed her diary instead of writing it down, resulting in L’opéra-mouffe (The Mouffe Opera), a 17-minute experimental short film.

L’opéra-mouffe is an off-putting, engrossing, and overall strange beast of a film. We open with some text describing a neighborhood in Paris called La Mouffe. Then, a nude woman appears. She is on a bench, facing away from the camera, and behind a transparent curtain. The credits roll as an overture plays, then the curtains lift, and a cut reveals Varda’s very pregnant belly. A few more seconds later, a pumpkin appears, which is immediately stabbed, cut open, and emptied of its innards. Very subtle.

Throughout the runtime of L’opéra-mouffe, there are many more moments like this: A dove inside an upside-down fishbowl, Dorothée Blank and José Varela as nude lovers, and the faces of the locals of La Mouffe, in all their age and weariness and sadness and curiosity. Underneath all this, music wafts from romantic to somber to downright itchy. Pregnancy, for Varda, is messy. It is the product of desire (literal flesh) and bliss, the act of producing beauty, and also pain itself; she knows that her child will one day also be old and sad, that it will one day die. The editing reflects this confusion. Though seemingly divided into neat chapters, L’opéra-mouffe‘s mixed emotions bleed reflexively back and forth, seeping into everything we see.

Every time I finish L’opéra-mouffe, I feel differently about it. Sometimes, it is the beautifully composed imagery that lingers (the shot of a comely naked man cradling a cat comes to mind). Other times, I feel alive; the ad-lib yet methodical editing brings such energy to the piece. And sometimes I’m just left unnerved. But no matter the takeaway, it is every time that Varda assures me of her voice.

With these three short films, Varda announces herself as not just a one-hit wonder; she’s got a lot to say. And while not all winners, each piece has obvious value, and each piece showcases how Varda isn’t content with doing the bare minimum, even if it’s “only a commercial” (side note: can all commercials be twenty-minutes long and feature gorgeous color photography please?). Oh, and shout out to Georges Delerue, who wrote lovely scores for both Du côté de la côte and L’opéra-mouffe.

Overall, I give Varda’s 1958 short films 4 open umbrellas out of 4 limping ladies. Watch them now on The Criterion Channel.

In 1962, Varda returned to feature films with a classic that has been hailed as not only one of the best pieces to come out of the French New Wave, but one of the greatest films of all time! Does Cléo from 5 to 7 live up to these highest of expectations? We’ll find out next week!

Thank you for reading! Have you seen any of these shorts? Comment down below!

[…] documentary for nearly a decade, she was intent on capturing these shifts in culture through her smaller works. Today, we look at two such documents. Both focus on communists, some of them young, some of them […]

[…] Varda, and stars Corinne Marchand as the titular Cléo Victoire, a famous young singer living in Paris. I’ll be honest, I’ve been dreading writing this piece. The audience follows Cléo for […]

I love Varda, but I’ve never seen any of these. I’ve seen Cleo, Le Bonheur, Far from Vietnam, One Sings, the Other Doesn’t; Vagabond, Kung Fu Master, Simon Cinema, and The Gleaners & I. Are these available only by subscription or is there physical media?

You can either get a Criterion Channel subscription to watch her films, all of which are currently available on the site (there is a 14-day free trial, and it’s $11 a month after that), or you can get every single one of her features and shorts, as well as dozens of bonus interviews and video essays, on Blu-ray in Criterion’s glorious brand new box set, The Complete Films of Agnès Varda, which also includes a 200-page book on her life and films.

That sounds amazing. I guess it’s good I never got around to upgrading Vagabond from VHS. ;)

I own the box set (it’s a large reason why I started this series) and it is spectacular; it’s the single best thing in my library.