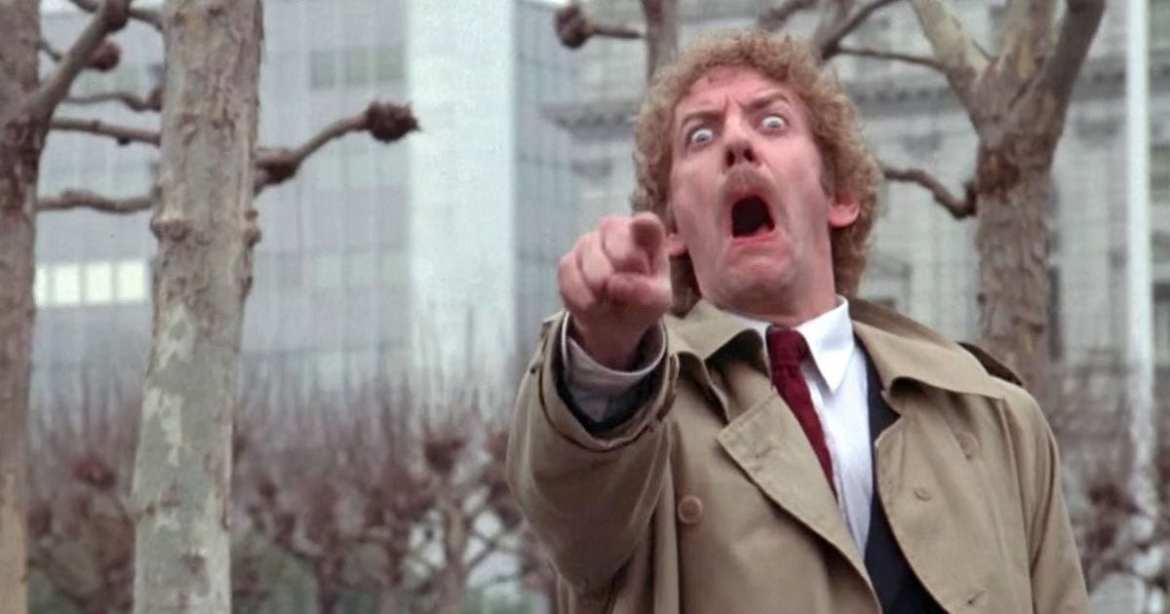 It’s about a year now since I discovered Tubi TV. Until the beginning of this month, I barely used the search function. I usually start nosing around in one of the many categories and quickly find what I am looking for. But about two weeks ago, I was in the mood for a film with one of my favorite actors, Mads Mikkelsen. That’s when I discovered that you cannot use the search function for names. A great pity indeed.

That doesn’t mean you cannot have fun with it. Type in a word and every title containing/resembling it will appear on your screen. I tried it with “wolf”, “dinosaur”, “haunt”, and “shark”. This explains why there are two movies this month featuring The King of the Sea.

Something (Really) Good: The Invasion of the Body Snatchers (1978)

I saw this movie for the first — and also only — time in the early eighties. At that moment, I was only a teenager and the movie made quite an impression on me. It actually scared the shit out of me and it took me weeks before I felt comfortable around plants again. But has it withstood the test of time?

Well, I would say yes and no. The idea of aliens slowly invading earth by replacing us via plants with exact copies lacking any emotion is still a scary one. The movie oozes a sense of paranoia and the special effects are still effective. The movie is nowadays seen as a classic in the sci-fi horror genre. That is quite an honor considering that this is a remake. The original classic dates from 1956 and is based on a book that was published one year earlier.

The problem lies in the pacing of the film. Donald Sutherland‘s character — an inspector at the Health Department — takes his sweet time before he realizes that his friends are not suffering from a delusion. From the moment that he finally understands that something is terribly wrong with mankind, there is no stopping the aliens. That being said, the movie is a perfect example of how skilled an actor Sutherland really is.

By the way, I still don’t have plants in my home.

New Zealand. Land of vast, magnificent landscapes. The background of too many Lords of the Rings and Hobbits. Also the home of killer sheep. Yes, you read that right. These innocent-looking carriers of wool have become nasty. Black Sheep is the first film by director Jonathan King who also wrote it. It’s a perfect example of horror-comedy, a not-so-easy subgenre to tackle.

The main characters are two brothers who grew up on a sheep farm. Henry (Nathan Meister) has returned home to sell his share of the farm to his brother, Angus (Peter Feeney). The latter has been experimenting with genetics to create bigger sheep. Instead, the mutant sheep turn into ruthless killers. Anyone surviving a vicious attack transforms into a violent sheep monster.

Angus and his scientists are being watched by two environmentalists, Grant and Experience (Oliver Driver and Danielle Mason). Due to his rash behavior and his clumsiness, the former quickly becomes the first victim of a mutant lamb. Experience herself flees and thus runs into Henry. The two decide to put an end to Angus’ experiments. Easier said than done because the whole flock has become infected. Ferocious sheep turn up everywhere and chase Henry, Experience, and farmhand Tucker throughout the beautiful scenery.

Black Sheep could easily have become a low-level B-movie. Luckily, there is a brilliant cast and some very effective special effects. I actually became afraid of the animals. I am not quite sure how long that effect will last. Moreover, the ending of the movie is the wackiest you will ever see. It involves a fart, a man’s genitals, and a weirdly behaving dog.

Note to self: mutton will never again be part of the menu at home.

The shark is without any doubt the most popular evil creature in monster horror movies. Maybe a bit too popular. Mega Shark vs. Giant Octopus is the first of the Mega Sharks series and is the product of The Asylum. This independent movie company specializes in so-called mockbusters. These are bad copies of blockbusters, and are low-budget, straight-to-video movies.

Bad movies can become fun or somehow enjoyable. This is not the case here. The first problem is the cast. Debbie Gibson is a singer-turned-actress who thinks she will win an Oscar someday. “Actor” Lorenzo Lamas does his utter best to be a villain and ends up being ludicrous. The special effects are mediocre — and I am being polite. The biggest issue, however, is that the movie takes itself too seriously. Do we really need a scientific explanation for the survival of two prehistoric monsters?

If you really can’t get enough of sharks, I can offer you an alternative. Tubi TV has two of the three Sharktopus movies in its catalog. I had fun watching Sharktopus vs. Whalewolf (2015). Whalewolf looks more like a combination of a mutant dog and a mean dolphin. The first victim dies during a funeral and both monsters make a guest appearance during a local production of The Bachelor. Last but not least: Casper Van Dien and Catherine Oxenberg are having a blast.

Another note to self: I will never take a plane again for fear of being swallowed by a Mega Shark.

Let’s face it: there is an oversaturation of horror movies featuring sharks. Is it still worth making another shark movie? That is the question that Matteo Molinari (The Silence of the Hams) and Jason and Matthew Ellsworth (Potluck) try to answer.

Whether you can watch Bad CGI Sharks or not, depends on your sense of humor. Let me give you an example. At the beginning of the movie, there is a sequence involving a beautiful woman, who is just off her period. While waiting for her boyfriend, she gets attacked by a land shark, circling her bed. When the boyfriend finally shows up and sees the mangled body of his girlfriend, he utters the immortal lines: “Babe!? Did your pussy explode?!”

If this is not your kind of humor, then don’t bother watching Bad CGI Sharks. I, on the other hand, did like it, but the quality of humor goes down rapidly, very rapidly. The movie does have some strong ideas, but not enough to sustain a whole screenplay. Moreover, Matteo Molinari and the brothers Ellsworth (co-writers and co-directors) are not good actors. Again, I am very polite here.

The movie features two estranged brothers who are reunited after many years. At that moment, their script about a shark comes alive. The rest of the movie consists of the two men being chased by this floating shark. Molinari himself plays the narrator and becomes instantaneously very irritating; the bad CGI shark is a gimmick that wears off after two seconds. In short: I found the whole movie to be boring and annoying. The best part is the exploding pussy.

Last note to self: be aware when walking in a dark street, for you never know what might be following you.

Film Review – The Killing of a Sacred...