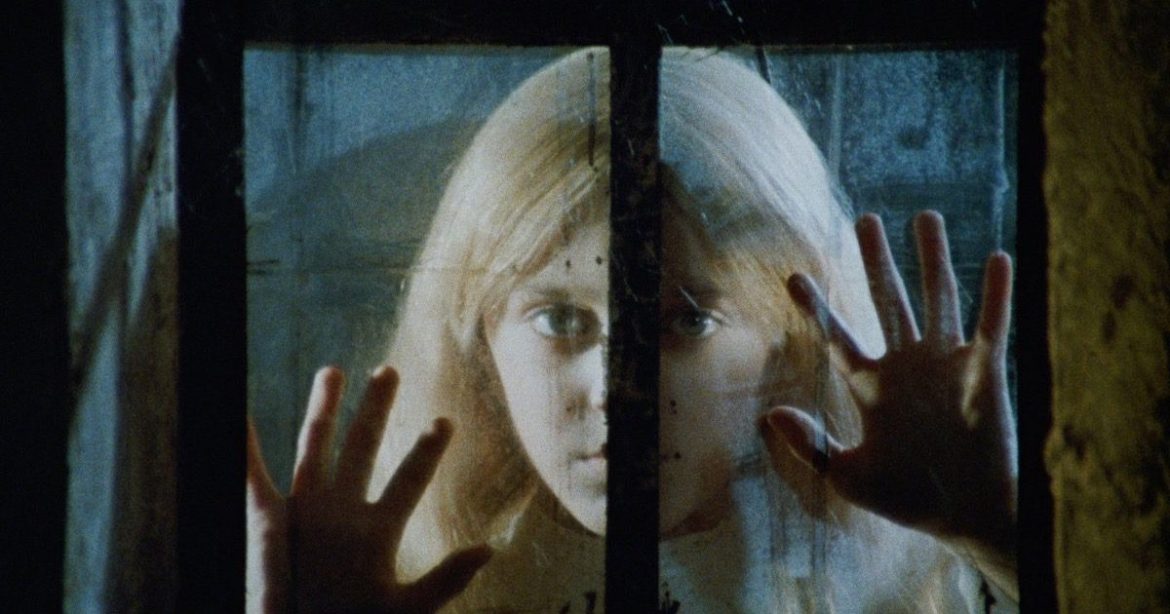 My favorite part of the Halloween season is watching spooky films for the very first time. Whether it’s watching classic horror movies I should have seen a long time ago or unearthing a few cult fascinations, every October is a time of great discovery in the film community, and one of the very few times we collectively turn our focus towards a specific genre. That is why I come to you today with a recommendation: Mario Bava’s Kill, Baby…Kill!

Thanks to Kino Lorber’s recent restoration of the film, I was introduced to this 1966 Italian gem for the first time just a few days ago. I’ll likely return to it in the years to come as well. It’s a movie set in a Transylvanian village with curses, witchcraft, psychedelic visuals, and an unrelenting sense of paranoia — what more could you need out of a spooky movie???

In an effort to persuade you so that you may take the leap as I did, here are a few reasons why you should check the film out:

Kill, Baby…Kill! begins rather oddly. It abruptly opens in a locked-off shot peering at a mansion partially hidden by trees. You expect the camera to move first, but instead, a woman runs furiously outside into frame. A cut to a closer view of this mystery woman quickly follows, but that subtle subversion of a character running into an establishing shot rather than the camera moving in on her immediately creates a sense of imbalance. Typically, that’s not how a movie looks — some may be quick to label it as “awkward” — but it works very well for a movie that then relies on making you feel “off” for the rest of the runtime.

The woman then sprints over to an abandoned building (conveniently) across the lawn, flailing her arms uncontrollably. As she reaches the top of the stairs, you can see she’s fighting some sort of dark force in her mind, although you have absolutely no idea what is actually happening until much later. The camera slowly inches back from the unknown woman to show a few spikes (also conveniently) below her. She screams out, but falls to her death as if she has no control over her body.

Mind you, this is all within the first 90 seconds of the film! The Kill, Baby…Kill! title card pops up onscreen as soon as the woman is impaled (with great effects work, I might add) and we’re off. Gotta love an efficient opening.

After the opening credits roll, our hero Dr. Paul Eswai (Giacomo Rossi Stuart in a very dapper three-piece, double-breasted trench suit) arrives at the village to examine the dead woman’s body and deliver a cause of death. He sees three men in the distance sprinting off with a coffin to bury it — the paranoia is quickly settling in.

After talking specifics with Inspector Kruger (Piero Lulli), Paul learns that the woman’s name is Irena Hollander. The townspeople are almost in a near-frenzy over the body — the men we saw a few minutes ago were attempting to bury Irena’s body before Paul could even look at it.

The village believes Irena is the latest casualty in a long and horrible curse that pervades the land. Naturally, as pragmatic men, Inspector Kruger and Paul initially believe it’s all a hoax. With the help of a local named Monica (Erika Blanc), the only person in town who has any qualifications remotely close to a physician (she studies natural sciences, a cute little detail showing the town’s unwillingness to embrace science in the face of unnatural evil), Paul tries to get to the bottom of what is actually happening. It’s a classic horror movie standoff between science vs. superstition.

Obviously, we’re in a horror movie, so there’s more going on in Kill, Baby…Kill! than just freak accidents. It’s revealed that the ghost of a young girl named Melissa terrorizes the town after dying tragically years ago. Once she reveals herself to you, it’s only a matter of time before you die yourself.

Kill, Baby…Kill! is a 1966 Italian film, so yes, all of the dialogue is dubbed in post. Many Italian films made at the time were produced by multinational companies and had casts filled with actors from different countries who spoke different languages. Instead of teaching the cast members to speak the same language, they were instead dubbed after the fact. Other productions simply didn’t have sound equipment on set. The choice was also a matter of distribution: the companies would dub each film in the language of each country in which it would premiere. Even today, Italian cinema prefers dubbing over subtitles.

Sometimes, I find this version of dubbing very difficult to stomach, but I think it works best in Italian horror. Similar to the works of Dario Argento, Kill, Baby…Kill! has a very dreamy mood about it. The dialogue is so mismatched with the actors’ lips that it adds a hallucinatory element to the supernatural scares; it distorts reality even further.

There are also a few unintentionally hilarious moments thanks to the dubbing. Somehow, it makes silly lines like, “I almost think the devil’s here!”, even sillier.

You would think a movie titled “Kill, Baby…Kill!” would rely on over-the-top exploitation for its scares, but that’s not the case! The film is actually very atmospheric and reserved for the most part.

By my count, there is only one true jump scare in Kill, Baby…Kill!, and it’s a good one! To get a quick jolt out of the audience, the film relies instead on snap zooms which are wonderfully retro in every way possible. (The film also makes many character introductions using the same technique, which got a few laughs out of me.)

However, most of the scares are communicated through creeping dread and reality distortion. Melissa’s sinister little girl laugh is VERY creepy, and it drowns out all the other onscreen sound. Shots of Melissa peering in through a window or raising her hand into view are also extremely unsettling. Later on, as the curse becomes more pronounced, reality seems to fold in on itself, commonly shown through looping actions, such as a character continuously entering the same room (my favorite scene in the film), or someone running down a seemingly never-ending staircase.

The scariest part? The victims are aware they are inhabited by Melissa’s curse, but are powerless to stop it. Their bodies’ movements are out of their control, which leads to some pretty gruesome self-stabbings where the character is screaming out in agony.

But most of all, Kill, Baby…Kill! has a lovely spooky atmosphere. Everything about it feels otherworldly. The village set — seemingly filled entirely with old ruins, cemeteries, and dead trees — feels so lovingly produced. Excessive fog, bursts of radiant colors, and a dreamy score (which was cobbled together from stock music used in other Bava productions) also make for a movie that seems like it was engineered to play during the Halloween season.

I’m amazed Kill, Baby…Kill! works at all: the production ran out of money during the shoot (which only lasted 12 days) and the crew mostly improvised on the spot because they started filming without a finished script. You can tell that was the case pretty easily: Giacomo Rossi Stuart’s character consists of “looks like an aging Ken Doll”, while Erika Blanc’s Monica is mostly…there, until the movie decides to do something with her in the third act. In truth, the supporting characters are far more interesting; Mario Bava has a fun way of letting characters jump into the frame, completely own it for a few minutes, and then disappear entirely. Maybe it’s a function of the ramshackle script, but it also creates the feeling that anything can happen to anyone at any time. Some characters are introduced solely to be killed later, but it adds to the town’s paranoia and the hold the curse has over them. No one is safe.

Thank you for reading! What are your thoughts on Kill, Baby…Kill? Comment down below!

[…] as an avid fan of exploitation cinema, I’m certainly not going to complain about how its male lead is objectified. But it […]

[…] normally attribute accusations of witchcraft to the Salem witch trials, or some other time in the distant past that was more conducive to such […]