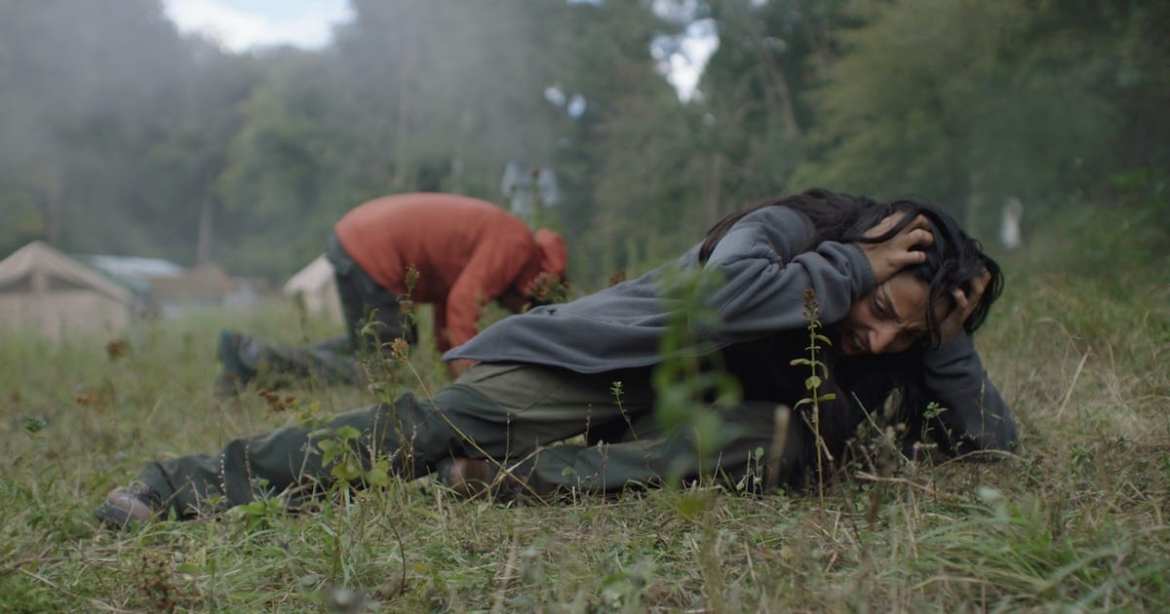 Ben Wheatley seems like one of the few directors who seems to be doing whatever he wants. From the occult thriller, Kill List; to an estranged couple who rekindle their spark through serial killing in the dark comedy, Sightseers; to one long shootout between arms dealers in Free Fire; to a faithful adaptation of one of J.G. Ballard’s strange works of fiction, High-Rise.

These films are often hard to quantify with one specific genre. Kill List might be a thriller, but could easily be hailed as an example of English folk horror, as well as a character study and a family drama. Sightseers is both a relationship drama, a portrait of two dysfunctional lovers who happen to go on a killing spree (think a less romantic Badlands on the English countryside), and a pitch-black comedy that would make John Waters proud. High-Rise, probably due to Ballard’s material, is both an anthropological look on the savagery of human beings — sometimes venturing into horrific imagery that could qualify it as a horror film — as well as a darkly humorous critique on Thatcherite capitalism. What connects these films is the sense of gleeful cynicism about the state of humanity. The problems these characters face are often exacerbated by their own inherent flaws, by problems they aren’t willing to confront, by a selfishness they aren’t willing to admit to. None of these characters are guaranteed a happy ending.

My favorite of his work has always been A Field in England. It’s a film that’s nearly impossible to describe in mere genre terms. Taking place in 17th century England, it’s a period piece filled with surreal horror, dark comedy, and existential character drama. As the title suggests, it takes place on a small piece of the English countryside, as four characters must defy the whims of a sinister alchemist. It’s beautifully bonkers but it’s also strangely heartfelt in comparison to Wheatley’s merciless oeuvre.

If you’re only familiar with Wheatley from his slightly controversial remake of Rebecca, please check out his earlier filmography, to truly understand the appeal of his filmmaking.

Unfortunately, Wheatley has apparently been courted to do some big-budget Hollywood shlock. Future projects include a sequel to The Meg (you know, the giant shark movie starring Jason Statham) and a sequel to Tomb Raider (not the Angelina Jolie one).

Perhaps Wheatley is genuinely interested in tackling some conventional Hollywood fare, or perhaps he’s doing this so he’s able to finance something more idiosyncratic. In either case, neither of those films are made for geeks like me. But before he’s giving us his cinematic interpretation of a giant shark, Wheatley has helmed another indie-horror film — filmed in secret, during the start of the pandemic — In The Earth.

It’s an annoying cliché to say, but nonetheless true: It’s best to watch In the Earth completely blind. An experienced genre aficionado will probably guess some of its twists and turns, but even so, this is the kind of film where becoming enamored by the sinister unknown, is one of its most joyous features.

A mysterious outbreak, obviously inspired by COVID-19, has lapsed the world into chaos. But the viewer won’t see any of this chaos, as we follow scientist, Martin (Joel Fry), journeying to a research center in a forest. Due to having been quarantined for several months, Martin has trouble adjusting to the old-fashioned norms, as evidenced by his awkward conversations with fellow scientists. As a researcher of micro-organisms, Martin has arrived at the research facility to work with Dr. Wendle (Hayley Squires), who has disappeared. Before the other scientists lost contact with her, Dr. Wendle was doing research into a mysterious fungus that seems to dominate the forest, and possibility communicating with its singular consciousness that drives it.

Together with a park ranger, Alma (Ellora Torchia), Martin ventures into the woods to find the missing Dr. Wendle. After being attacked by unknown assailants at night, they receive aid from a long-haired friendly hermit called Zach (played by Wheatley regular, Reece Shearsmith). Soon enough, things get weird. 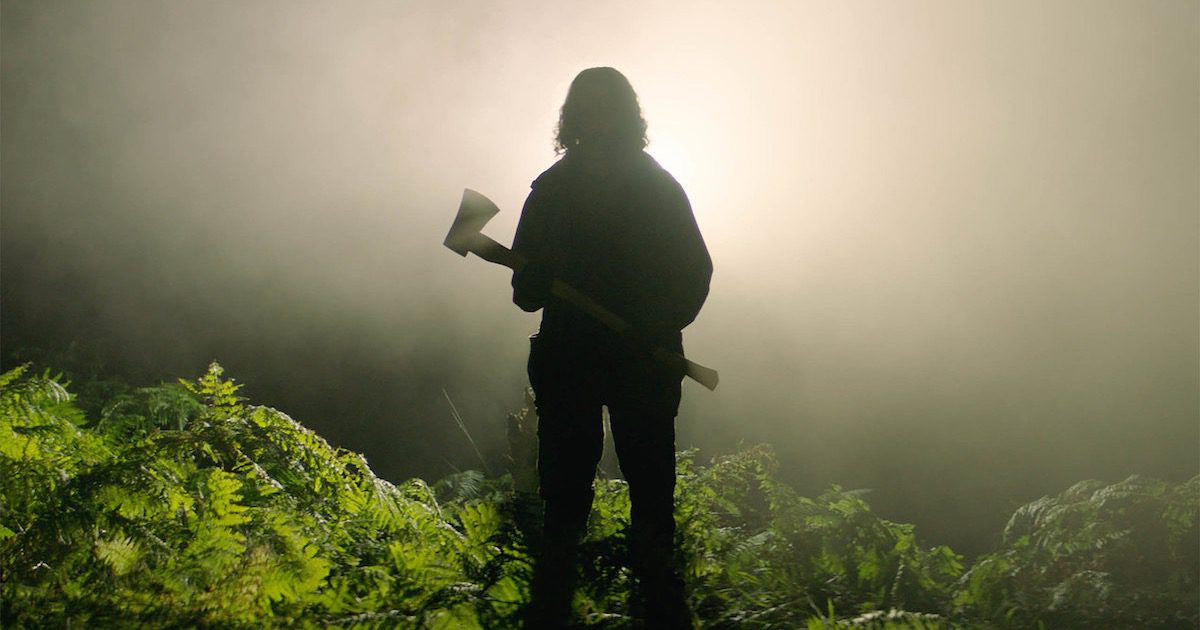 The film’s limited cast does a bang-up job. Joel Fry brings a pleasing vulnerability to Martin. He’s not a tough guy, he’s scared, wimpy, and whiny — though considering what happens to him, it’s hard not to feel for him. Ellora Torchia as the no-nonsense Alma is the perfect accompaniment to this meek Martin. Without spoiling too much, this is not a film with a damsel in distress — more often than not, it’s quite the opposite.

Shearsmith is reliable as always, unsurprisingly stealing the show when he appears. There’s more to tell about his character, though I would then be spoiling major plot points.

Back to Their Old Ways

In the Earth takes place entirely in the seemingly tranquil forest, where the presence of some malevolent force cannot be denied. There’s this constant feeling that the characters are being watched. Even with its unsettling atmosphere, Wheatley does infuse some of his trademark gallows humor — the highlight being one concerning a magnificently sharp ax.

The background of this disease outbreak feels like an afterthought. In truth, with some tinkering, it might not even be necessary for the plot. Though it does establish one instance of poignant dialogue between Martin and Alma, as they discuss the world after the pandemic. “Everyone will forget what happened,” states the cynical Alma, possibly a surrogate of Wheatley’s own misanthropic worldview, “they’ll just get back to their old ways.”

Being a fan of synth music, the film’s soundtrack courtesy of Clint Mansell became one of my favorite aspects. Similar to Mansell’s soundtrack to High-Rise, the soundtrack, even with its shades of John Carpenter, is ethereal. It’s more interested in mood rather than emoting a specific emotion from the viewer.

Anyone sensitive to flashing lights should probably pass on the film. Its surreal sequences are portrayed through a cacophony of awesome synth music, strobe lights, and flashing imagery. While initially entertaining, I do feel the film gets a bit lost in these stylistic choices, especially when it starts to drag the runtime a bit.

The film’s first half is also more engaging than the second half. In the beginning, you are wondering where the film is going, but as the film proceeds, it becomes at times disappointingly predictable. Most notably, the motivations of one character becomes quite obvious and you’re just waiting for the inevitable ‘revelation’.

The film’s scientific themes, the notion that invisible nature might communicate itself through sound and light to humans, is interesting, yet undeveloped. There’s an interesting aspect of our need to constantly humanize the inhuman, such as nature, that never feels truly explored.

There’s also a pagan subtext that similar to its scientific themes, feels undercooked. The mythology that is established is fascinating, especially when it’s combined with scientific rhetoric. It’s just a shame it isn’t fully explored.

The ending of the film also isn’t entirely satisfactory. Despite the ‘flashy’ editing, the climax feels disappointingly conventional. I do have the sense that something else, something more transcendent, was needed to truly make it memorable.

Still, In the Earth is a worthwhile new entry in Wheatley’s fascinating filmography. Its journey might be more interesting than its eventual destination, but it’s still a highly engaging, twisted piece of cinema.

Mr. Wheatley, please make more movies like this than giant shark movies with Jason Statham. There’s plenty of other lesser filmmakers who are more than willing to waste the audience’s time with that nonsense.

Thank you for reading! What are your thoughts on In the Earth? Comment down below!