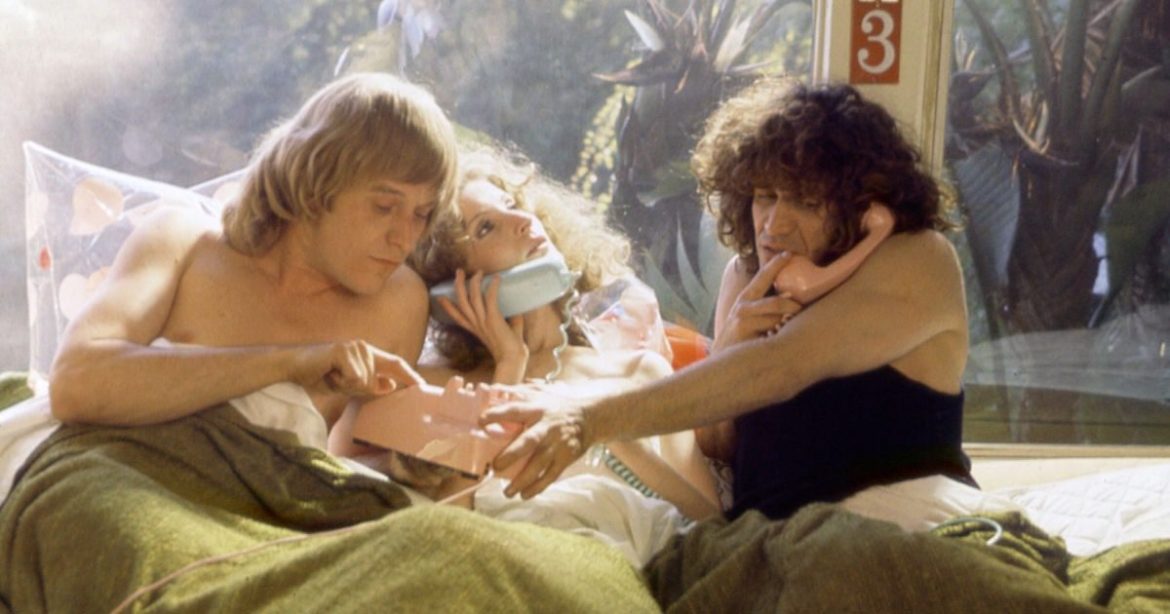 After a decade of revolutionizing cinema in France, Agnès Varda was finally sent to Hollywood with the promise that she would be able to further cement herself as an international sensation. But, as if it were her destiny to forever remain an independent auteur, the studio execs denied Varda final cut. So what does Agnès Varda do while stuck in California for a few months with nothing to do but get weird? Why, the answer is in the question, of course.

Lions Love (…and Lies) is a 1969 narrative(?) feature written(?) and directed by Agnès Varda. The film stars James Rado as Jim, Gerome Ragni as Gerry, Viva as Viva, and Shirley Clarke as Shirley Clarke. Over the course of a week in the summer of 1968, Jim, Gerry, and Viva hang out in a house overlooking LA, while Shirley Clarke tries and fails to get a Hollywood film made. Much of the film highlights the real world current events that occurred just before filming.

Normal Is Out the Window

In case it’s not obvious already, Lions Live is barely not a documentary. Rado and Ragni, who were freshly famous for writing and starring in the 1967 musical Hair, which would quickly become known as the definitive representation of the psychedelic/free love/hippie movement, essentially play themselves. Viva, who was known for being apart of Andy Warhol’s crew, and Shirley Clarke, a New York-based underground director, straight up do play themselves. And not only do these people play themselves, they casually break the 4th wall, be it talking to Varda or talking to each other about the movie they’re making. Even Varda and her camera appear in shots every now and then.

The result of such casual disregard for narrative convention is a complete sense of liberation, something which has both pros and cons. On the plus side, one can simply sit back, relax, and expect the unexpected throughout the entire runtime of this film; there are scenes and moments, pointless to try and describe here, that are just brilliant (keywords: fast-forwarding, cardboard camera, swapping shirts, breathing). On the negative side…well, the pacing kinda sucks. Lions Love runs 110 minutes, and it could’ve easily been 80. Specifically, there’s a thread involving children that just doesn’t need to be there. But then again, who cares?!?! This movie’s frickin’ weeeeird, so screw the pacing!

With Lions Love, Varda offers a testament to ambivalence. This is most evident with the actor/character Shirley Clarke. Clarke is/is playing the Varda surrogate role: a director who comes to Hollywood to make a movie but, when she arrives, is denied creative freedom. The response Varda/Clarke…you know what, the line is so blurred I’ll just call her Clarda. The response Clarda has is a cinematic one: suicide. However, when that scene (the best in the film) arrives, Clarke isn’t on board with Clarda, while Varda is determined to see Clarda through. An argument ensues. While seemingly a break in the narrative, the moment actually further explores Clarda’s trauma, as well as gives the audience an insight into the differing philosophies of Clarke and Varda. If none of this making any sense to you, by the way, you really should just watch the film. Trust me, it’s worth it.

However, Clarda’s narrative (what a stupid name, this is hilarious) is only a portion of the film. Lions Love takes place over the first week of June in 1968. Throughout the film, the characters are watching television. On that television are the last days of Bobby Kennedy, his assassination, and the fallout. In addition, Andy Warhol (Viva’s real-life friend) is shot and hospitalized during the events of the film. Jim, Gerry, and Viva recreate their reactions to these events, but sometimes also don’t, leaving the audience to only guess how they grieved. The stark frankness with which Varda presents these things clashes with the freewheeling tone of the rest of the film, but it works, because that’s how it feels in real life.

Speaking of real life, Varda offers an interesting representation of Hollywood. In many ways, Lions Love is your typical 60s representation of The City of Dreams. Our leads are White, somehow rich, and without a care in the world besides glitz and glamour. But instead of reveling in that like most films of the era would, Varda continuously points out the artificiality of it all. Early in the film, Viva points out how she has both real and fake Birds of Paradise, but “the fake one is prettier because it has less mistakes.” Towards the film’s conclusion, the narrative stops so Varda can show a short “documentary” on stars of the Golden Age; again we are denied the normal glorification of their lifestyle. Varda focuses on souvenir shops, a stand selling maps to stars’ homes, and the homes themselves, which are empty and falling into ruin: Hollywood in a nutshell.

One more thing: Viva explicitly talks about her relationship with Jim and Gerry in the film. Now, Varda always maintained that she was portraying a love triangle in Lions Love. However, I don’t think that terminology is correct; I believe that it is here that Varda actually did give an example of polyamory (as opposed to in Le Bonheur). And what’s cool is that it’s a very positive representation of a “throuple.” I mean, they’re all basically dimwits, but they’re very endearing dimwits! The relationship is always consensual, they’re always sweet to each other, and most of the time they’re quite scantily clad, so good for them.

Lions Love is summed up pretty well by its last scene (no spoilers): the characters peel away in order to reveal the people underneath, Varda is confronted by her actors, and it goes on a little long, but that’s kinda the point. This film is, make no mistake, very strange, and not for everyone. But if you can get on its wavelength, I think you’ll find something full of life, or at least freedom.

I give Lions Love (…and Lies) 6 days spent watching TV out of 9 days spent in bed. Watch it now on The Criterion Channel.

Agnès Varda made two more films while in California, both short documentaries exploring those living and working and striving on the margins of society. We’ll look at Uncle Yanco and Black Panthers next week. See you then!

Thank you for reading! Have you seen Lions Love (…and Lies)? Comment down below!

[…] try to give Hart anything beyond comedic material. Die Hart is an example of the lazy kind of meta-filmmaking; the kind that thinks the gimmick in it of itself is sufficient to center a film […]