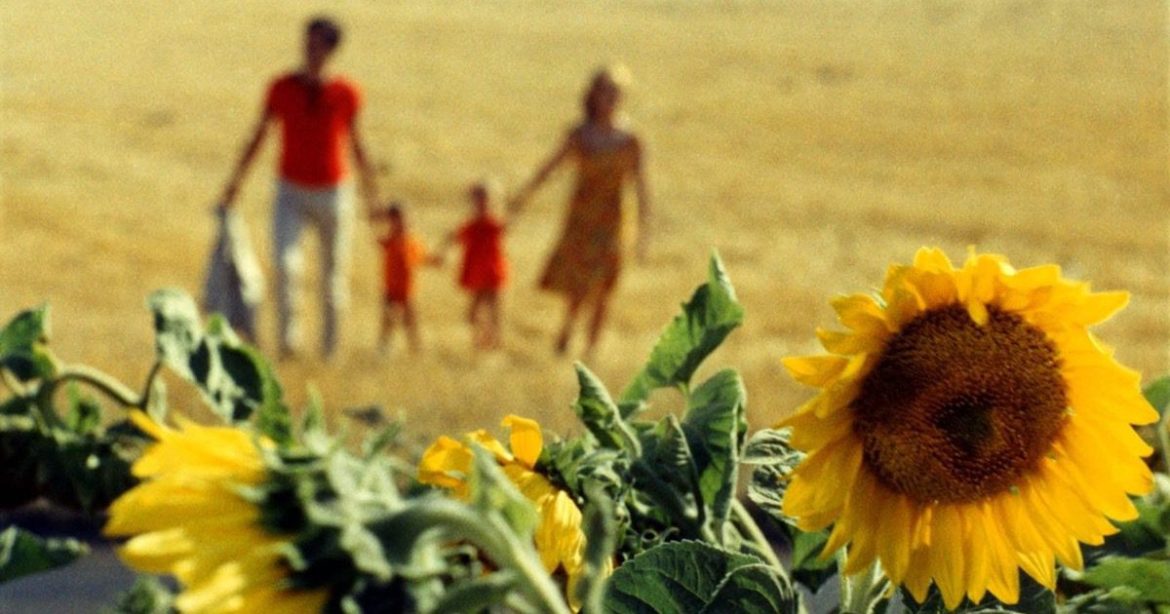 After the gigantic success that was Cleo from 5 to 7, Agnès Varda was a star, and not just in France. So what did she do next? Why, she pushed the envelope again of course. But this time, it wasn’t by playing with cinema’s form. That would’ve be too easy. Instead, Varda set her sights on something far more provocative; with Le Bonheur, Varda sought to subvert the most sacred institution itself. And boy howdy, were feathers ruffled.

Le Bonheur (Happiness) is a narrative feature film written and directed by Agnès Varda, and stars Jean-Claude Drouot as François, a husband and father living happily on the outskirts of Paris. Though completely satisfied with his family (played by his real-life wife, Claire Drouot, and children), François begins an affair with a postal worker (Marie-France Boyer). Over the course of the film, he juggles both of his loves, wanting simply to live with as much happiness as possible.

Warning: due to the nature of the film’s structure and themes, it will be necessary to spoil the twists and turns of Le Bonheur in this article. Since I highly highly highly recommend going into the film without knowing how things go down, skip to the section entitled Final Thoughts or, better yet, stop reading this and go watch it right now on The Criterion Channel (and then come back obviously, as I am in desperate need of attention).

Now that everyone’s seen it (or at least been amply warned), we can continue.

When Your Eyes Orgasm More Often than the Romantic Lead

Let us begin with the immediately obvious: Le Bonheur is freaking gorgeous to look at. To call Le Bonheur a color film would be an understatement. Now, we’ve seen Varda work with color before in her two commercials from 1958 (as well as in the opening of Cleo from 5 to 7). In both commercials the saturation of the capital-C Color was pushed to the max; such is also the case with this film. From frame one, we are bathed in bright green forests and deeply yellow sunflowers and houses with pastel walls. Le Bonheur is so colorful, in fact, it doesn’t even fade to black. Instead, it literally fades to all the colors of the rainbow, a technique I wish we’d see in more films.

But Varda isn’t using all this color just to dazzle us. In Le Bonheur, colors signal exactly where the characters are at emotionally. When the romance gets intense, so do the colors. When that same love is sapped away, the saturation drains out of the frame as well.

The colors of Le Bonheur also serve a structural function. When we open, the busy frames filled with flowers and greenery plunge us into late spring; the beginning of new life and love. Over the summer, there is an upspoken tension underneath the euphoria, so while colors are bright (even the blues feel warm), the lighting is harsher. And when we end with everything resolved, it is as autumnal as things can get. Things have cooled down, and are a bit…darker.

The Horror in the Happiness

Alright people, we can go no further without discussing the sharp left turn. Last chance, y’all.

Le Bonheur ultimately reveals itself to be, despite all its colors and cheeriness, a dark and twisted drama. When François finally tells his wife of his affair during an afternoon in the forest, he tries to convince her that all is well, that he loves her just as much as before, and that things can continue without a crisis. Much to the audience’s surprise, Thérèse seems to take it well, and they make love. However, when François awakes, Thérèse has vanished. He soon finds her: she is dead, drowned in a lake.

This alone would be enough to throw a viewer for a loop, but Varda does not stop with just that melodrama. A mere month or so after he loses his wife, François asks Émilie, his mistress, to live with him and raise his children. And she does.

When the film opens on the image of a happy nuclear family, it is set to Mozart, his Clarinet Quintet in A to be exact. The piece is buoyant and joyous and quaint. During the film’s final moments, we are again presented with an image of a nuclear family, and Mozart again overwhelms the soundtrack, but this time it is with the much bigger and more menacing Adagio and Fugue in C minor. François has retained his family and retained his happiness. But Thérèse is dead, and Émilie has lost her independence. There are smiles on everyone’s faces, except the audience.

The audacity of Varda.

Multitudes of Attitudes and Perspectives Aplenty

So, what are Varda and Le Bonheur saying with all this? Well, people have been arguing about it for 55 years now.

Firstly, the debate surrounding the nature of Thérèse’s death is still very much subjective. While the way it happens implies suicide, Varda edits in two quick shots during François’ encountering of Thérèse’s body. They show Thérèse submerged in the lake reaching for a branch. This suggests that her falling into the lake was an accident. However, the scene where François finds and cradles Thérèse is very different than the rest of the film; the colors are more muted, the sound drops completely, and the shot keeps looping erratically. Should the viewer interpret this as a moment being replayed inside François’ mind, then it’s not much of a leap to postulate that the shots of Thérèse in the water are how he is imagining what happened.

Ultimately, I see the scene as intentionally obscure. I mean, a bystander said she had been gathering flowers before she drowned; the whole thing seems to be a direct reference to Ophelia’s death from Hamlet, whose fate is also famously ambiguous. Do I have a take? Actually, no. I guess for me, the much more interesting debate is whether Le Bonheur is a feminist piece.

Now, at the time, Le Bonheur was sharply criticized as antifeminist (Varda had not explicitly announced and explored her feminism in her films, that would come later); after all, the film’s events reinforce the prioritization of the nuclear family over a woman’s agency. Not only that, it excuses the man’s infidelity as a natural desire for “happiness,” and not a violation of his wife’s trust and consent.

In more recent years, the film has been re-evaluated, and I think rightly so. One of the most affecting moments of Le Bonheur is after Thérèse’s funeral, when friends and family are discussing how they’ll move forward in regards to caring for the children. By the end of the conversation, they haven’t figured it out, but they have all agreed that they should all go on vacation together in order to generate some happy memories. Varda then, in all her genius, cuts to a photograph. The photograph shows François and his kids and his family and his friends at the beach, all smiling for the camera. The audience, when viewing the photograph, knows that they are not all happy. They are, in truth, grieving.

This moment is representative of the entire film. Le Bonheur is a photograph of a marriage, a family, and an affair, followed by a new family. The colors are bright, the faces full of smiles. But even though the image seems cheery, the truth behind the image is more painful. Varda is at her most ironic here. She wants you to reject the image, to see the family at the end for what it really is: a tragic example of the patriarchy’s effects. Varda wants you to grieve for the women who have given up their lives for the men who care only for their own happiness.

One last thing on the feminist analysis of Le Bonheur. Is Le Bonheur about polyamory? Now, if one is to agree with the feminist interpretation, that François is a jerk who only thinks about himself and more specifically his penis, then probably not. But hey, I’m queer, so I investigated anyway.

Throughout the film, François explains how his love for his wife and his love for Émilie are not in conflict with each other, that they only add up to an even greater sense of belonging. This holds up under the definition of polyamory; that is how it works. But there’s one key element missing: total consent. François has consent from both Émilie and Thérèse to be in a relationship with them individually. And Émilie is aware of and okay with François’ relationship with Thérèse. But Thérèse is not aware of, and therefore cannot be consenting to, François’ relationship with Émilie. Soooooo…it’s complicated.

In my opinion, the polyamory interpretation is problematic at best. But if you wanna see it that way, then I guess that’s up to you.

Le Bonheur is perhaps Varda’s most confrontational work, precisely because it appears so pleasant on the surface. If one takes everything at face value, it’ll put everyone off but the misogynists. And if one doesn’t, if they do see the irony, then it’ll still mess with their head, but in the best way. It’s kinda brilliant like that.

I give Le Bonheur 8 naps in the forest out of 5 huge piles of sawdust. Watch it now on The Criterion Channel.

Agnès Varda followed up Le Bonheur the very next year with what would become her first critical and commercial failure. But is her take on how writers achieve inspiration really lacking inspiration itself? We’ll find out next week when we look at the 1966 film Les Créatures. See you then!

Thank you for reading! Have you seen Le Bonheur? Comment down below!

[…] from here on out, we have genuine recommendations. As far as thrillers go, The Fugitive is fairly effective. The characters are easy to invest yourselves in, the plot is followable. Now, the film does also […]